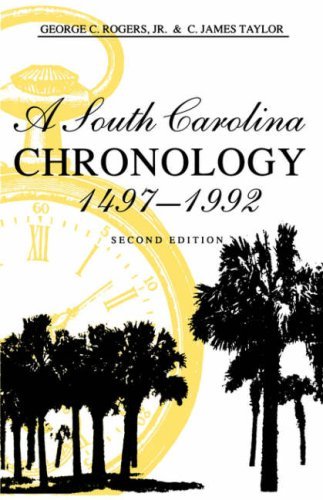 A South Carolina Chronology, 1497-1992 recounts the landmark events that have defined the past half millennium in the Palmetto State. To the much-heralded first edition, George Rogers and James Taylor have incorporated issues of gender and race to present a truly comprehensive overview of South Carolina's heritage.

An easy-to-use inventory of the politics, laws, economics, wars, protests, people, storms, and cultural events that have had a major impact on South Carolina's history, this compilation reflects the full scope of the state's past. From the earliest European explorations to BMW's selection of South Carolina as the site of its first U. S. automobile factory, A South Carolina Chronology, 1497-1992 lays a solid foundation for organizing any study of the Palmetto State.

The preeminent historian of South Carolina, George C. Rogers, Jr., has written numerous books including Evolution of a Federalist: William Loughton Smith of Charleston, 1752–1812, and Charleston in the Age of the Pinckneys.

C. James Taylor is associate research professor of history at the University of South Carolina and co-editor of The Papers of Henry Laurens.