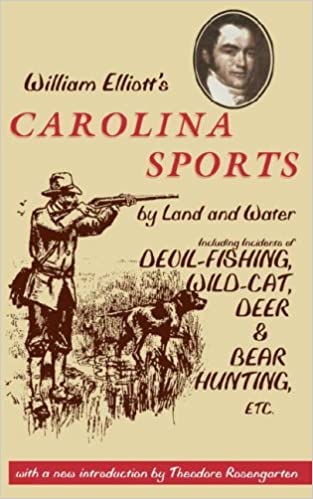 Carolina Sports by Land and Water

Including Incidents of Devil-Fishing, Wildcat, Deer, and Bear Hunting, Etc.

The wild and woolly adventures of a nineteenth-century sportsman

In the first half of the nineteenth century, rice and cotton planter William Elliott hunted bear, deer, and wild-cat in the South Carolina Lowcountry. In the rivers he fished for drum, sheepshead, and bass. he even claimed to be the first person to slay a devil-fish in Port Royal Sound. Elliott was a sportsman's sportsman, and in Carolina Sports by Land and Water, he recorded his most memorable confrontations with nature.

Set in an exotic American milieu, these vividly rendered tales resonate with the rush Elliott felt as he stood face to face with two bears that he later killed with a single shot, as he fought a powerful drum fish and eventually landed it in his craft, and as he harpooned a devil-fish and then held the line while the mammoth ray pulled his boat more than twenty-five miles. Elliott's captivating sketches preserve a bounty of natural history and locale wisdom, and just as important, they provide insight into a Southern way of life that would soon end in civil war.


William Elliott (1788–1863), a native of Beaufort, South Carolina, was a planter by profession and a writer by avocation. An alumnus of Harvard, he amassed a great fortune in land and slaves, yet his fame rests primarily on his book Carolina Sports by Land and Water, first published in 1846.