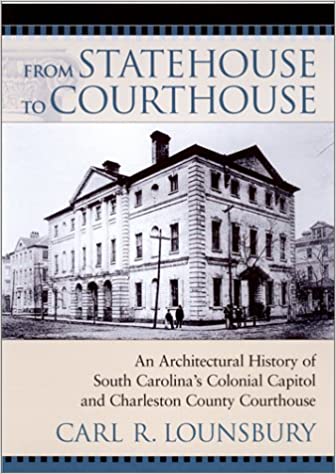 From Statehouse to Courthouse

From Statehouse to Courthouse traces the historical and architectural development of one of the most important but least understood buildings constructed in eighteenth-century South Carolina. Built at great expense in 1753 as the colony's first statehouse, the structure, located at Charleston's famous "Four Corners of Law," housed all branches of provincial government, was the site of many significant events of the American Revolution, and became the county's courthouse when the state capital moved to Columbia. In this richly illustrated and extensively documented history, Carl R. Lounsbury chronicles the struggle to erect such an impressive civic structure, assesses the architectural significance of the building, and comments on the edifice's changing appearance and use over two and a half centuries.

An architectural historian intimately involved with the analysis of the building's original fabric, Lounsbury helped to recover surprising amounts of early brickwork, plaster, and paint beneath layers of modern sheetrock, wallpaper, and shag carpeting. From these findings and carefully gleaned documentation, he charts the fortunes of the building.

In addition to chronicling the building's eventful architectural and social history, Lounsbury details the detective work necessary to rescue this significant structure from obscurity and the debate that restoration generates within communities. His account of the colonial capitol serves as a blueprint for the proper methods of investigating early building practices and of garnering consensus for the restoration of a nationally important architectural treasure.

Carl R. Lounsbury is an architectural historian with the Colonial Williamsburg Foundation. An author of Architects and Builders in North Carolina: A History of the Practice of Building, he has taught early American architectural history at several institutions in Virginia, including Mary Washington College in Fredericksburg, College of William and Mary in Williamsburg, and the University of Virginia at Charlottesville. Lounsbury lives in Williamsburg, Virginia.

""When Hurricane Hugo tore open the Charleston County Courthouse in 1989, it also opened up an opportunity to discover the rich history of a unique American landmark. In this intriguing study of architectural detective work, Carl R. Lounsbury traces the complex development of the building from its splendor as the South Carolina Statehouse in the 1750s through the changes that accommodated Charleston life through the eighteenth, nineteenth, and twentieth centuries."—Catherine Bishir, author of North Carolina Architecture

"From Statehouse to Courthouse offers Charleston architectural history at its best, with thorough contextual and archaeological analyses of origins and design sources, and illustrates the evolution of a historical building from colonial statehouse to county courthouse to hurricane-ravaged shell. The book is also a guide to the decision making that has characterized Charleston's most significant preservation project."—Kenneth Severens, author of Charleston Antebellum Architecture and Civic Destiny