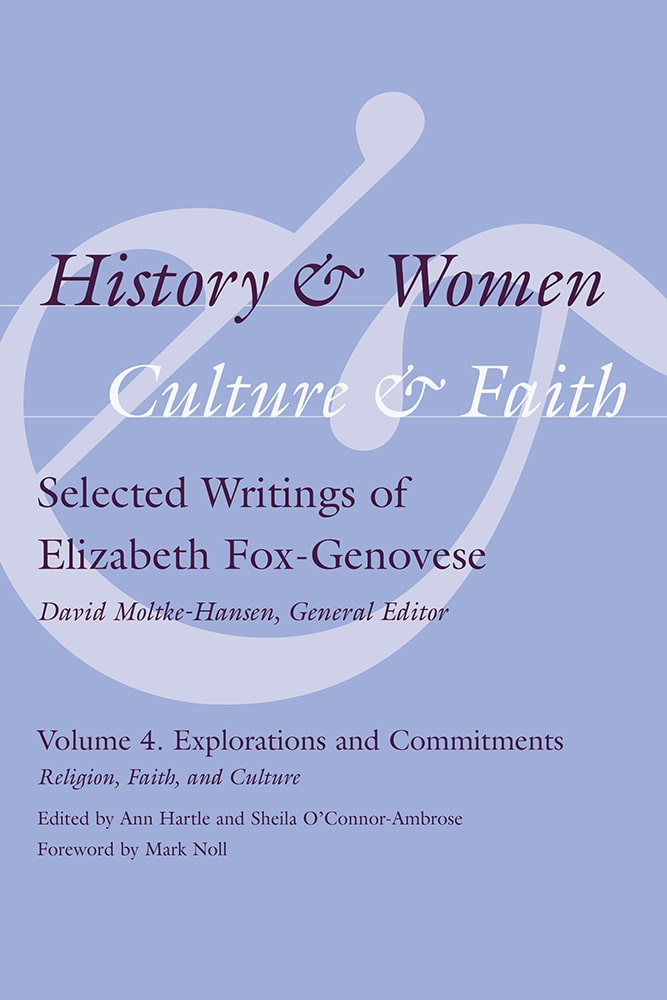 edited by Ann Hartle and Sheila O'Connor-Ambrose
foreword by Mark A. Noll

Following Fox-Genovese's lifelong discourse concerning the individual and the community, Volume 4, Explorations and Commitments: Religion, Faith, and Culture, contains twenty-five essays that document her migration from a secular historian's understanding of religion to a view of faiths informed by her conversion to Roman Catholicism. Throughout her journey, Fox-Genovese firmly asserted that the church offered past and present protection to culture against the excesses of modernity by advocating the sanctity of life, preserving the importance of the family, and respecting genuine community.

Mirroring Fox-Genovese's recognition of the importance of religion to the development of history and the underpinnings of a common culture, this volume begins with a series of essays examining the value of studying religion through a historical lens. Even prior to her conversion, Fox-Genovese's personal blending of Marxism and feminism led her to become an advocate for the sanctity of human life, believing that abortion was the abhorrent nadir of a society that valued economic gain, individual freedom from responsibility, and untrammeled personal liberty over natural human relationships. When Fox-Genovese converted to Catholicism in 1995, she refined many of the previous themes that had characterized her lifelong work to reflect the fulfillment of a Christian sense of community, faith, feminine and familial identity, and culture. The essays in this volume provide an intimate perspective to Fox-Genovese's faith transformation as she investigated a variety of literary, philosophical, economic, and sociopolitical issues.

Volume 4 also includes a foreword by Mark A. Noll, the Francis A. McAnaney Professor of History at the University of Notre Dame and author of America's God: From Jonathan Edwards to Abraham Lincoln and The Civil War as a Theological Crisis.

Shelia O'Connor-Ambrose earned a Ph.D. in women's studies from Emory University, where she studied with Elizabeth Fox-Genovese. Editor of Fox-Genovese's posthumously published Marriage: The Dream That Refuses to Die, Connor-Ambrose is a fellow of the Alexander Hamilton Institute in Clinton, New York.