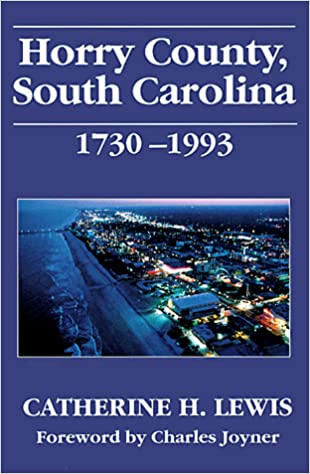 Horry County, South Carolina, 1730-1993 chronicles the colorful yet little-known past of the Palmetto State's largest county, a region now known primarily for the world-famous beaches of its "Grand Strand." Surrounded on three sides by ocean, rivers, and swamps and on the fourth side by the North Carolina border, Horry County remained geographically and culturally isolated from the rest of South Carolina for much of its history and, as such, developed a distinctive culture and a reputation as the "Independent Republic." In this absorbing history of South Carolina's northeastern corner, Catherine H. Lewis tells the story of the state's least-understood region and of its transformation from a secluded farming district to one of North America's most popular vacation spots.

Suggesting that Horry County's past does not fit neatly into South Carolina history, Lewis demonstrates its decided differences-political, social, and economic-from other regions of the state. She describes how, in contrast to the rest of South Carolina's coastal plain, which boasted grand plantations dependent on extensive slave labor, Horry County was divided into modest farms worked by yeoman farmers. She recounts its slow path to self-government; involvement in the Revolutionary, Civil, and World Wars; development of medical, social, and educational amenities; and rise to prominence as a tourism capital.

In addition, Lewis introduces readers to Peter Horry, the Revolutionary War officer for whom the county was named, and a host of memorable residents, including Jane Beaty Norman, an altruistic social activist and church founder; Lorenzo Dow, an eccentric itinerant preacher; and H. Kemper Cooke, a self-styled "backwoods statesman" known for his consistent opposition to the state senate's established leadership. Lewis also shares a wealth of local lore, recounting such infamous events as the two "battles" of Conwayborough, the unorthodox Republican strategy in the 1876 gubernatorial campaign, and the carnival-like trials of mass murderer Edmund Bigham.


Catherine H. Lewis grew up in Loris, South Carolina, and has lived in Horry County for most of her life. For twenty-seven years she was director of the Horry County public library system and, since her retirement, has written and lectured widely on the history of the "Independent Republic." Lewis has initiated courses in the history of the county for Coastal Carolina University and gives a popular lecture series at Horry-Georgetown Technical College. In 1995 she received an honorary doctorate of humane letters from Coastal Carolina University. Lewis is the mother of three sons.

"No one knows the rich history of South Carolina's Horry County better than Catherine Lewis, and few historians can surpass her skill as a story teller."—Rod Gragg, author of The Illustrated History of Horry County

"Catherine Lewis has dedicated many years to documenting the rich and wonderful history of Horry County. This book includes many of the people, places, and events that make ours one of the most interesting and fascinating counties in the state of South Carolina."—Gregory K. Martin, mayor of Conway, South Carolina

"This is the fruit of seven decades in Horry County, as a child, county librarian, local historian, and teacher-at-large. Rich and varied (words the author applies to the area), this book expresses an engaging pride in her home-especially in its frontier toughness-and is laced with political savvy."—Randall A. Wells, author of Along the Waccamaw and director of the Horry County Oral History Project