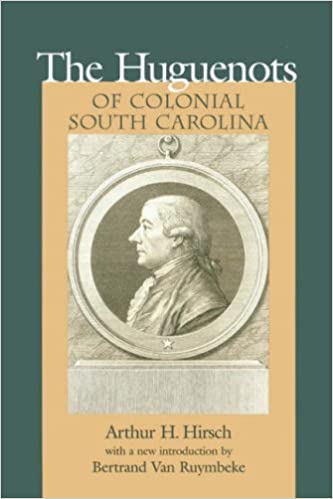 The definitive study of the Huguenot influence in South Carolina

Although the first group of Huguenot settlers numbered no more than six hundred, they arrived in the colony at a time when they could exert a disproportionate and fundamental influence on early colonial institutions. Hirsch explains how they quickly became a political force and aided the Anglicans in establishing the Church of England in South Carolina. He also traces the ways in which successive generations left an indelible mark on the cultural and economic development of the colony and the new state.

Bertrand Van Ruymbeke's new introduction places Hirsch's book in its historiographical context as the product of a 1915 University of Chicago dissertation and the intellectual heir of Charles W. Baird's groundbreaking work on the subject. He examines the book's strengths, notably its accurate identification of assimilation as the major theme of Huguenot history in South Carolina and its integration of archival and family history research. Van Ruymbeke also brings to bear his own prodigious research in French archives on the backgrounds, number, and manner of immigration of the early arrivals. He provides a new look at the way the Huguenots found a place in the political economy of colonial South Carolina.

Bertrand Van Ruymbeke is a visiting assistant professor of history at the College of Charleston in South Carolina.