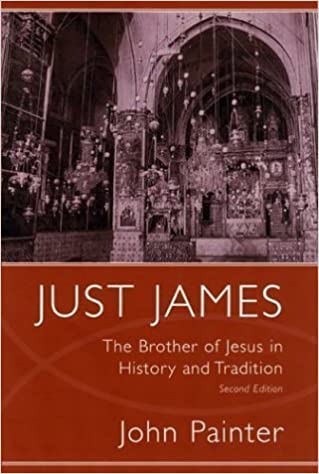 The Brother of Jesus in History and Tradition

A new edition of Just James by John Painter was planned in November 2002 after the announcement of the discovery in Jerusalem of a Jewish ossuary, or burial box, inscribed in Aramaic with the words, as commonly translated, "James son of Joseph brother of Jesus." Though evidence of tampering with the inscription led to the discrediting of the claims made about it, the publicity surrounding the controversial discovery made many people aware that Jesus of Nazareth had a famous brother named James. The new edition of this book examines the evidence and claims surrounding the ossuary, as well as taking the opportunity to respond to new questions and lines of inquiry relating to James. In addition to offering corrections, clarifications, and elaborations of the existing text, there is a substantial addition of new material of which the examination of the ossuary and the arguments surrounding it form but one small part. It does, however, provide a substantial critique of the evidence. In the light of the discrediting of the claims, this aspect of the book allows the reader to assess how conclusive the verdict is. At the same time, the inscription puts in question the practice of translating the name in the inscription—and in its Greek forms in the New Testament—as James rather than as Jacob. This issue is taken up in the second edition.

Two other issues receive further detailed treatment in two new chapters in the second edition. The first edition argued that those known as "brothers and sisters of Jesus (the Lord)" in the New Testament and other early Christian sources were just that, and offered a critique of the alternative views (step-brothers/sisters and cousins). Since the publication of the first edition, it has become clear that the Eastern view in particular is attracting scholarly defenders in the West. Because of this, a new chapter deals more fully with a critique of the evidence upon which these two alternative views are based. Consequently the advocacy of the view that Jesus had four brothers and at least two sisters is now stronger and more detailed.

The new edition also develops a new view of the leadership of James in earliest Christianity. Since the publication of the first edition, the work of Jacob Neusner on the development of the Patriarchy, in the Judaism of the first two centuries c.e., has evoked similarities between the leadership of James and that of the evolving Patriarchy of the time. The new edition of Just James makes significant use of Neusner's analysis of the hereditary Davidic leadership role of the Patriarch and its relationship to the role of the Sages, which is comparable to the role of James in relation to the apostles and elders in Acts 15 and elsewhere. Though Patriarchy did not become the terminology of leadership in the Western Church, it is embedded in the language of the Eastern Church. A significant argument is made for understanding the leadership of James in the context of the Judaism of the time, which is more credible than an earlier attempt to relate it to the much later and Arabic phenomenon of the Caliphate. The leadership of the Patriarch is more collegial in character than the form that developed in the Church of the West. This aspect of the new edition throws light on Christian beginnings and may also provide a constructive perspective from which to view Church leadership in the present.

Just James analyses the varied considerations concerning James' relationship to Jesus as one basis of his leadership. While providing access to the early sources concerning James, Painter sets out the evidence for recognizing James as the direct successor to Jesus and the leader of the earliest Christian movement in Jerusalem. Recognition of the leadership of James is evident in the New Testament, though it is not prominent. The New Testament reflects other interests that focus attention on Peter and Paul. Nevertheless, in the New Testament, both Peter and Paul acknowledge James's authority, whether willingly or reluctantly. Further, none of the sources names any other single leader of the Jerusalem Church. By the second century the leadership of James in Jerusalem and beyond was fully acknowledged, and the sources reveal the extent of his reputation. By then Jewish Christians, Gnostics, and the emerging Great Church all claimed James as a foundational figure.

Using the person of James as a prism, Just James brings the history of earliest Christianity and its relationship to Jesus and Judaism into clearer view. For many centuries the prism was clouded by competing traditions that found in James support for their own ideology. In all of these the death of James received concentrated attention—from Josephus, the Jewish historian; Hegesippus, the Jewish Christian; Clement, the philosophical Christian of Alexandria; and the authors of the Gnostic texts of Nag Hammadi. The most comprehensive record of James' work and impact, marking the height of his influence, is in the fourth-century history of the Church by Eusebius of Caesarea. Without his account, which gathers the early sources together, the distortions introduced by the disparate traditions would prevail. His work makes a critical appraisal possible. Just James considers all the relevant sources, examines the forces that fractured the powerful image of James, and puts that image together again. James re-emerges as the singular first force in earliest Christianity.


John Painter, an Anglican, is a professor of theology at St. Mark's National Theological Centre at Charles Sturt University in Canberra. A regular contributor to international biblical and theological journals, he is the author of Mark's Gospel: Worlds in Conflict; The Quest for the Messiah; Theology as Hermeneutics: Rudolf Bultmann's Interpretation of the History of Jesus; Reading John's Gospel Today; John, Witness and Theologian; 1, 2, and 3 John; and more than 100 chapters and articles in scholarly books and journals. Painter lives in Canberra, Australia.

"For any person seeking a grounding in the historical development of Christianity, this is an excellent book."—Baton Rouge Advocate

"James's somewhat obscured historical role is examined with verve and creativity, as Painter speculates on the tensions that ran through earliest Christianity. This is an erudite and closely reasoned work that will be appreciated as well as vigorously debated by New Testament scholars."—The Bible Today

"This is a well-written, clear, thorough, useful, and needed work."—Sewanee Theological Review

"This book is not to be missed by any serious student of Christian origins."—Theological Studies