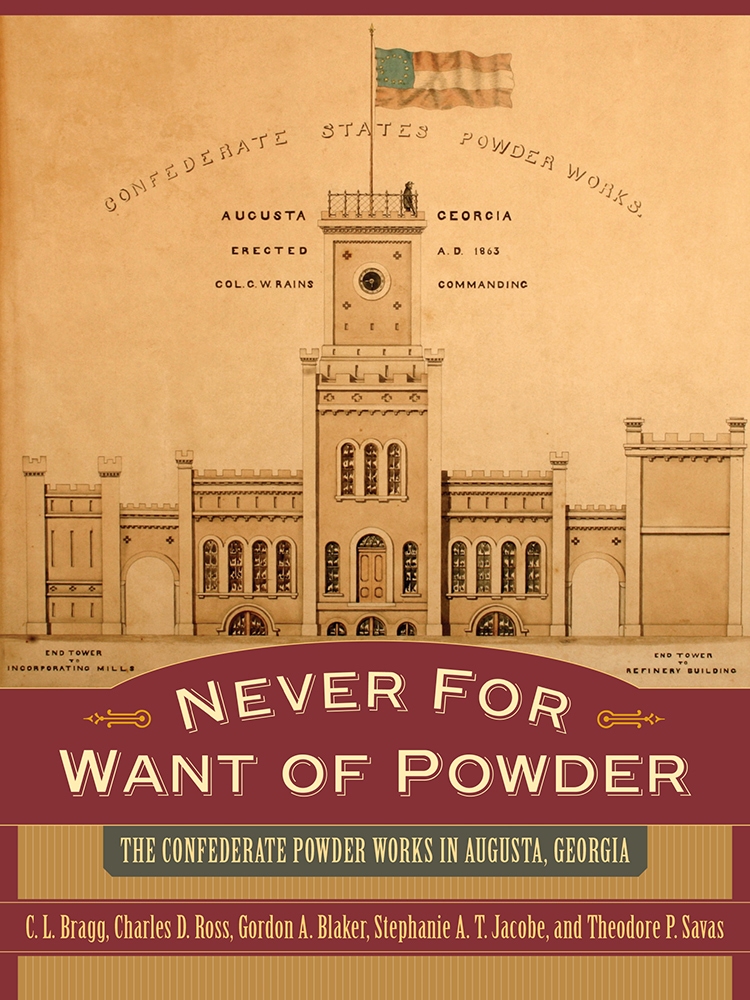 Never for Want of Powder

Lavishly illustrated with seventy-four color plates and fifty black-and-white photographs and drawings, Never for Want of Powder tells the story of a world-class munitions factory constructed by the Confederacy in 1861, the only large-scale permanent building project undertaken by a government often characterized as lacking modern industrial values. In this comprehensive examination of the powder works, five scholars—a historian, physicist, curator, architectural historian, and biographer—bring their combined expertise to the task of chronicling gunpowder production during the Civil War. In doing so, they make a major contribution to understanding the history of wartime technology and Confederate ingenuity.

Early in the war President Jefferson Davis realized the Confederacy's need to supply its own gunpowder. Accordingly Davis selected Col. George Washington Rains to build a gunpowder factory. An engineer and West Point graduate, Rains relied primarily on a written pamphlet rather than on practical experience in building the powder mill, yet he succeeded in designing a model of efficiency and safety. He sited the facilities at Augusta, Georgia, because of the city's central location, canal transportation, access to water power, railroad facilities, and relative security from attack.

As much a story of people as of machinery, Never for Want of Powder recounts the ingenuity of the individuals involved with the project. A cadre of talented subordinates—including Frederick Wright, C. Shaler Smith, William Pendleton, and Isadore P. Girardey—assisted Rains to a degree not previously appreciated by historians. This volume also documents the coordinated outflow of gunpowder and ammunition, and Rains's difficulty in preparing for the defense of Augusta.

Today a lone chimney along the Savannah River stands as the only reminder of the munitions facility that once occupied that site. With its detailed reproductions of architectural and mechanical schematics and its expansive vista on the Confederacy, Never for Want of Powder restores the Augusta Powder Works to its rightful place in American lore.

C. L. Bragg is the author of Distinction in Every Service: Brigadier General Marcellus A. Stovall, C.S.A.

Charles D. Ross is a professor of physics and dean of the College of Arts and Sciences at Longwood University in Farmville, Virginia. He is the author of Trial by Fire: Science, Technology, and the Civil War.

Gordon A. Blaker directed curatorial services at the Augusta Museum of History where he worked with an extensive collection of architectural drawings from the Confederate Powder Works. He currently is a museum specialist at the National Museum of the Army Reserve in Atlanta.

Stephanie A. T. Jacobe holds an M.S. in architectural history from Virginia Commonwealth University and is a contributor to Lost Virginia: Vanished Architecture of the Old Dominion.

Theodore P. Savas has been researching the life of George Washington Rains and is currently writing his biography. Savas has written, co-authored, or edited fifteen books, including A Guide to the Battles of the American Revolution (co-author), Hunt and Kill: U-505 and the U-boat War in the Atlantic (editor), and The Red River Campaign: Essays on Union and Confederate Leadership in Louisiana (editor/author).

"The Confederacy built an impressive manufacturing economy geared to waging war—including a massive powder works at Augusta, Georgia, that produced high-quality powder under the able direction of George Washington Rains. This beautifully illustrated volume provides by far the best examination to date of the Augusta works. Never for Want of Powder merits the attention of anyone interested in the intersection between war-making and industrial production during our nation's first great modern conflict."—Gary W. Gallagher, author of The Confederate War

"This is an exhaustive, well-written and much needed account of the Confederate Powder Works. The quintet of expert authors have made an impressive contribution to our understanding of how a remarkable group of men created the largest powder works in North America, kept it functioning, and produced millions of rounds of ammunition. Arguably, it was the powder works that allowed the Confederacy to survive militarily for four years."—Mary A. DeCredico, author of Patriotism for Profit: Georgia's Urban Entrepreneurs and the Confederate War Effort