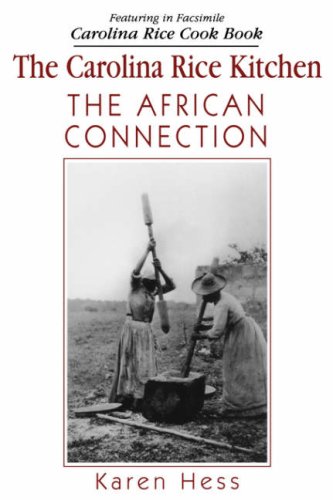 Where did rice originate? How did the name Hoppin' John evolve? Why was the famous rice call "Carolina Gold"?

The early history of the rice kitchen in South Carolina is inextricably bound to slavery. It was the African slaves who cultivated and cooked it. Although rice had not previously been a staple of the Eurospean plantation owners, it began to appear on the table every day. Rice became revered and was eaten at virtually every meal and in dishes that were part of every course: soups, entrées, side sishes, dessert, and breads. The ancient way of cooking rice, developed in the primeval rice lands of India and Africa, became the Carolina way. Carolina Gold rice was so esteemed that its very name became a generic term in much of the world for the finest long-grain rice obtainable. The Carolina rice kitchen evolved around the use of Carolina Gold rice.

This engaging book is packed with fascinating historical details and speculations as well as hundreds of recipes anda facsimile of the Carlina Rice Cook Book from 1901. The rice kitchen of Carolina was the result of myriad influences—Persian, Arab, French, English, and African—but it was primarily the creation of early African American cooks.

The recipes in this volume are a part of our American heritage. Karen Hess has included more than three hundred recipes for soups, fragrant pilaus, dessrts, and breads, and instruction is offered in the proper way to cook rice so that every grain is perfectly separate. Although most of the recipes are attributed to notable ladies of Charleston and the surrounding plantations, with more than sixty recorded by Sarah Rutledge in the mid-nineteenth century, a number were from Georgia.


Once called "the best American cook in Paris" by Newsweek, Karen Hess has conducted extensive research in culinary history. Her articles and reviews have appeared in the New York Times, Atlantic, Harper's, House & Garden, and Organic Gardening. Co-author of The Taste of America, Hess is the editor of The Martha Washington Booke of Cookery and of facsimile editions of several cookbooks, including The Virginia House-wife by Mary Randolph.

"Karen Hess has shaped this long-forgotten social history into a readable, informative, and highly beneficial narrative. Books like this make the ordinary lives of our forefathers seem much more authentic and closer to us than the Old South mythologies ever did."—South Carolina Historical Magazine

"The author calls this work a hymn of praise for the Africans enslaved and brought to South Carolina to clear the cypress swamps and plant and tend rice crops. But she's too modest. It's more of a symphony than a hymn."—The Sun (Baltimore)

"The lives of slave and slave owner are intertwined in this interesting history of the influence of rice (and African culture) on the economy and households of the Old South. The facsimile Carolina Rice Cook Book is a fascinating bonus, and there are plenty of recipes to try."—The Bloomsbury Review