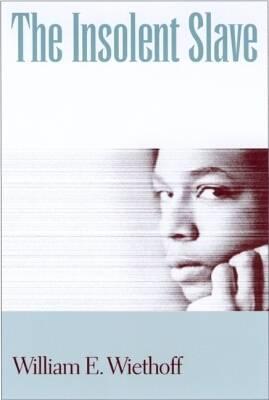 While scholars of American history have written extensively about slave insurgency in the form of rebellion, William E. Wiethoff considers a more subtle form of resistance that caused considerable consternation among slaveholders—that of insolence. Though he finds insolence to have been a rarely and carefully used "rhetoric of resistance," Wiethoff also finds the practice to have been one to which slaveowners were especially sensitive and which they sought to prevent by legislative, social, moral, and commercial means.

In this original contribution to the study of seventeenth-, eighteenth-, and nineteenth-century rhetoric, Wiethoff assesses the southern gentry's attempts to manage what they interpreted as insolence, sheds light on the power of slave speech, and illumines long-term implications for African American "code switching" and other forms of rhetoric.

Through surveys and case studies that include Fanny Kemble's firsthand narrative and entries from William Byrd's diary, Wiethoff evaluates the steps taken by slaveowners to suppress presumed slave insolence. Employing rhetorical, historical, and legal analyses, he examines expressions of unreflective judgment, self-persuasion, and sectional propaganda developed by the gentry to explain the insolent slave. Wiethoff identifies as especially noteworthy the related responses of overseers and plantation mistresses who were forced into an intermediary position between the higher authority of the plantation owner and the special manipulation directed at them by the slaves.

Wiethoff demonstrates that slaves learned quickly when to move toward the insolent and how to disguise their expressions of criticism and contempt. Though he finds insolence to have been a rarely and carefully used "rhetoric of resistance," Wiethoff also finds that slaveowners attached legislative, social, moral, and commercial meanings to this discourse.

William E. Wiethoff holds a Ph.D. in speech from the University of Michigan and is the author of A Peculiar Humanism: Judicial Advocacy of Slavery in High Courts of the Old South, 1820–1850. He is an attorney in Bloomington, Indiana.