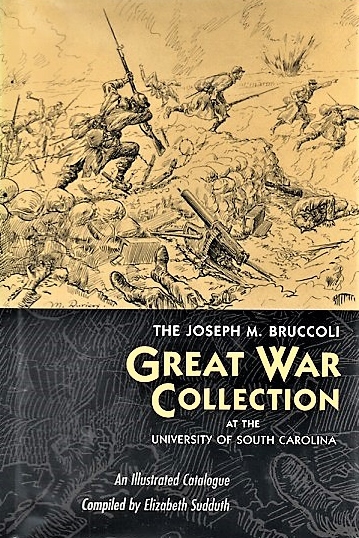 The Joseph M. Bruccoli Great War Collection At The University Of South Carolina

The Joseph M. Bruccoli Great War Collection at the University of South Carolina was established in 1997 by Matthew J. and Arlyn Bruccoli and named for Professor Bruccoli's father, who was wounded in the war. An expansive research archive for the literary, historical, and cultural aspects of World War I from the vantages of many of the combatant nations, the collection is housed in the Thomas Cooper Library on the University of South Carolina campus in Columbia.

The Bruccoli Great War Collection holds more than 4,000 items, including 3,400 print materials comprising military training manuals, illustrated wartime magazines, trench newspapers, novels and poetry of the war, letters, diaries, postcards, scrapbooks, photo albums, and glass slides. The collection also includes some 500 pieces of sheet music and more than 175 posters from the United States, Great Britain, France, Italy, Poland, Russia, and Austria. The comprehensive collection was expanded in 2002 through the incorporation of hundreds of books and documents from Joseph Cohen's research collection on World War I literature—additions that include extremely rare work by British poet Isaac Rosenberg. The Bruccoli collection's highlights include one of five known copies of Rosenberg's first publication, Night and Day (with a manuscript poem by the author and with his corrections), English and French editions of works by American poet Alan Seeger, and the complete 180-issue run of the Times Broadsheets.

A descriptive and illustrated inventory of the collection, The Joseph M. Bruccoli Great War Collection at the University of South Carolina: An Illustrated Catalogue provides a reference tool for the study of one of the great watershed moments in history on both sides of the Atlantic serving historians, researchers, and collectors.

Elizabeth Sudduth is the head of Rare Books and Special Collections Processing and Services for the Thomas Cooper Library at the University of South Carolina.

Matthew J. Bruccoli was the Jefferies Professor of English at the University of South Carolina.

"The Bruccoli Great War Collection impresses me enormously with the imagination and scope of its vision, as a scholar's treasure trove of cultural and historical resources, much of it unusual and rare—contemporary writings, sheet music, popular artwork, and design. In telling the story of how this collection came into being, Professor Matthew Bruccoli's compelling introduction serves as valuable inspiration to all those who have been involved in similar endeavours to collect and preserve historical materials."—Hugh P. Cecil, honorary lecturer, University of Leeds, and trustee and cofounder of the Second World War Experience Centre, Leeds, United Kingdom