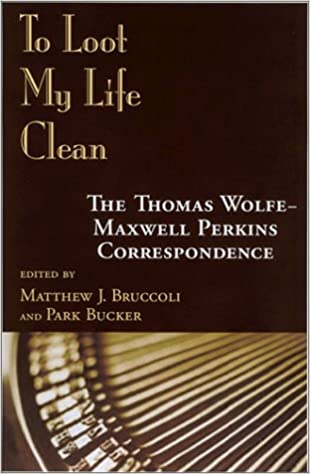 To Loot My Life Clean

The relationship between Thomas Wolfe and his legendary editor, Maxwell Perkins, has been the subject of guesswork and anecdote for seventy years. Beginning with the 1929 publication of Look Homeward, Angel, literary scholars have debated the writer's dependence on his editor and the degree to which Perkins participated in Wolfe's work. Now, with this volume of 251 letters between Wolfe and the House of Scribner (two-thirds of which have never been published), the mythologized friendship between the author and the editor is clarified, and the record can be set straight.

Celebrated for his close literary relationships with F. Scott Fitzgerald, Ernest Hemingway, and other literary giants of the early twentieth century, Maxwell Perkins was both mentor and father figure to Thomas Wolfe. According to the introduction, "The letters published here document Wolfe's artistic and professional problems, and demonstrate how Perkins, serving as both editor and friend, aided Wolfe in solving them. Only by considering all of the author/editor/publisher correspondence can Wolfe's literary career and his complex relationship with Charles Scribner's Sons be properly assessed." The successes and pains of both Wolfe's career and his friendship with Perkins are revealed in letters between the two as well as through Wolfe's correspondence with other Scribner employees. Documenting an important era in American literary history, the letters of To Loot My Life Clean span the Wolfe-Perkins friendship, from their meeting in 1929, through the novelist's break with his editor and the House of Scribner, until Wolfe's death in 1938.

Park Bucker earned his Ph.D. in American literature from the University of South Carolina in Columbia. He is the editor of The Catalogue of the Matthew J. and Arlyn Bruccoli Collection of F. Scott Fitzgerald. Bucker's volume on social fiction is forthcoming.

"Wolfe emerges as driven, intensely committed, locked in a torturous, exhausting struggle with his talent and material that verges on madness—a writer reliant on his editor's judgment but also possessing a clear artistic vision. High- strung, hypersensitive to criticism and in need of constant reassurance, he is difficult, demanding and 'crammed to the lips with living"—Publishers Weekly