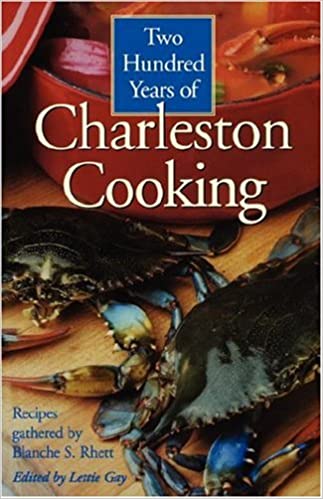 Blanche Rhett gathered these recipes from housewives and their African American cooks in Charleston, South Carolina. The recipes were full of family secrets, but they did not translate well into recipes because they lacked precise measurements. With encouragement from Helen Woodward, Blanche Rhett engaged Lettie Gay, who was the director of the Home Institute at the New York Herald Tribune, to do most of the work of interpreting, testing, and organizing the recipes into this book.

Blanche S. Rhett (1876–1942) was the wife of R. Goodwyn Rhett, the fiftieth mayor of Charleston, South Carolina. They lived in the historic John Rutledge House until his death in 1939.

"Here is a book that makes you hungry, not only for shrimp pilau and hoe cake, but for adventure and out-of-the-way places. After eating you want to stroll along the old streets of Charleston, study the iron-grilled porches and smell the flower gardens. For there is atmosphere in this volume, as well as information and glamour. The trio of authors has translated into familiar cupfuls and teaspoonfuls of recipes that were never evolved so accurately, and in most cases were never recorded. A good job was done by all."—New York Telegram (reviewing the original edition)

"Two Hundred Years of Charleston Cooking should appeal to people who enjoy cooking and to lovers of the old city. . . . Not only does the cookbook give a richness of recipes but it also gives colorful and descriptive views of the atmosphere of Charleston in days past"—The State

"Like many other good cooks, Charleson cooks know no rules nor measures but cook by instinct and a real knowledge of cookery. So this collection of authentic receipts was no easy task to collect."—Augusta Chronicle

"The publication of such a book...indicates the esteem in which such books are now held because of what they tell social historians as well as cooks about a people and a way of life"—Savannah Morning News