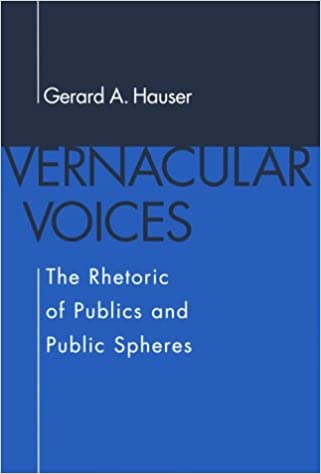 The Rhetoric of Publics and Public Spheres

Vernacular Voices addresses the role of citizen voices in steering a democracy through an examination of the rhetoric of publics—active segments of society that influence the general climate of public dialogue—and of the associated public spheres and public opinion. Gerard A. Hauser maintains that the interaction between everyday and official discourse discloses how active members of a complex society discover and clarify their shared interests and shape their opinions on issues of common interest.

This book sets forth a conceptual framework, called publics theory, for understanding how the rhetorical character of formal and informal communication bears on the spheres in which publics form and the quality of the opinions they express. Hauser extends his discussion through four case studies. The first explores the role of cultural memory and narrative in shaping the recent political transformations in Central Europe by contrasting events in Poland and the former Yugoslavia. The other case studies explore attempts to redefine the character of the public sphere by the so-called Meese Commission Report, the Carter administration's technological understanding of public opinion during the Iranian hostage situation of 1979-80, and the dialogue of the American people with Franklin D. Roosevelt on the meaning of America as expressed in letters encouraging him to stand for a third term in office.

Gerard A. Hauser is professor emeritus of communication and Arts & Sciences Professor Emeritus of Distinction in Rhetoric at the University of Colorado Boulder. He is the author of Introduction to Rhetorical Theory and Prisoners of Conscience: Moral Vernaculars of Political Agency.

"This diverting, timely study of what it means to have a voice in civil society and how it is achieved offers new conceptions of complex public spheres. . . This title would be apt to use as a textbook, given its wisdom, orderly and clear presentation, and interdisciplinary approach."—Choice Reviews

"Gerard Hauser's Vernacular Voices is an ambitious, wide-ranging, and thought-provoking theoretical discussion of public opinion and the public sphere. Hauser rightly disputes the "authority" we grant to opinion polls, and he aspires to develop a "rhetorical" alternative for discovering and communicating public opinion."—Argumentation and Advocacy

"And insisting upon seeing vernacular exchanges as important forms of political discourse is part and parcel of Hauser's very useful project of shifting attention away from a non-existent public sphere to the real publics in which people spend much of their lives. That project is useful for a variety of reasons, but one of the most striking is that it provides a much more hopeful view of political discourse in democracy."—Rhetoric Society Quarterly

"As we leave a century that has seen Vox Populi deified, only to be profaned and then abandoned, Hauser's bold study could not have appeared at a better time. In Yugoslavia, and Poland, Roosevelt's 1940 campaign, and modern disputes about pornography, Hauser finds evidence that public voices are capable of resilience and even eloquence. Vernacular Voices is an inspired and inspiring work."—Tom Farrell, Northwestern University

"The study of public deliberation has been hindered by an unnecessary division of labor between political theorists and those who study what people actually say. Gerard Hauser shows how much can be gained by joining theoretical argument and the analysis of persuasive discourse. His thoughtful discussion of the vernacular practices and dramatic events of public life reveals how democracy works because it is more complicated, interactive, and provisional than reason alone would allow."—Robert Hariman, Drake University