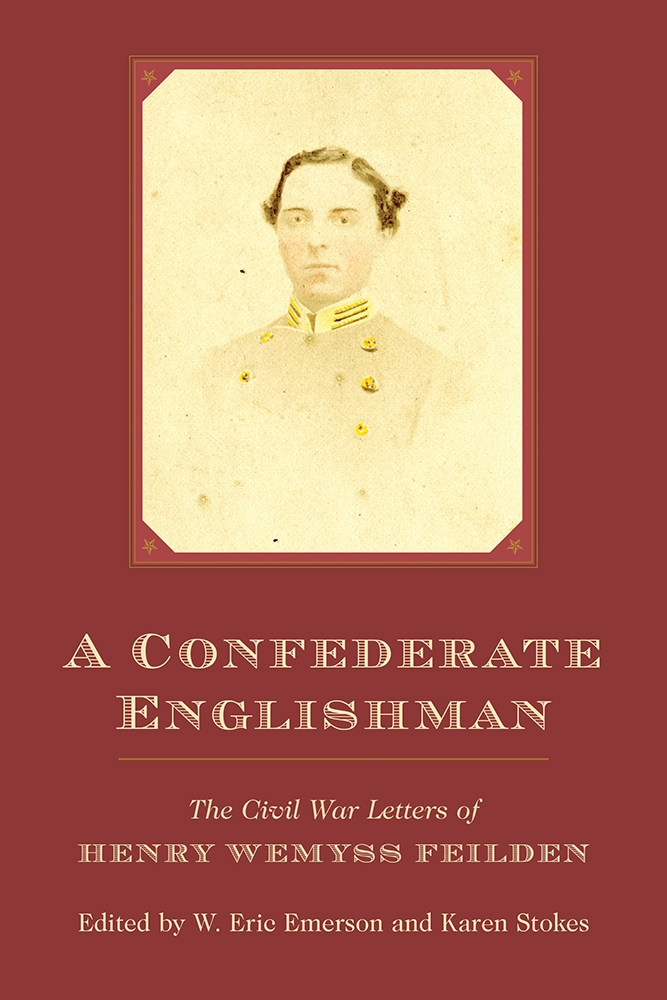 A Confederate Englishman presents for the first time the fascinating Civil War correspondence of Henry Wemyss Feilden (1838-1921), a young British officer who resigned his commission and ran the blockade to become a Confederate staff officer in Charleston, South Carolina. Editors W. Eric Emerson and Karen Stokes have compiled Feilden's letters to chart the history of his eventful career in the Confederacy from the time of his arrival in South Carolina in 1863 to the end of the war.

Born the second son of the Baronet of Feniscowles, Feilden had experienced much before his arrival in America. As a young officer, he served during the Indian Mutiny and during the Second Opium War in China. His fascination and empathy with the Confederacy, however, propelled the young Englishman to risk his life to run the Federal blockade of Charleston. After traveling to Richmond, Virginia, the capital of the Confederacy, to obtain a commission as captain in the Confederate Army, he returned to Charleston to serve on the staff of General P. G. T. Beauregard, whom he greatly admired. During the war Feilden married a young South Carolinian, Julia McCord. His witty, vivid, highly readable, and sometimes romantic letters to her offer a compelling view into the operations of the military department headquartered in Charleston, conditions and events in and around the besieged city, and the heart of a man in love.

A Confederate Englishman provides the insight and perspective of Feilden's experiences with operations in the large and vital Department of South Carolina, Georgia, and Florida during the war's final two years. After the war Feilden returned to England with his wife to resume his career in the British army, and later he became a noted Arctic explorer and naturalist. In addition to his Civil War correspondence, A Confederate Englishman features a selection of Feilden's letters from the early twentieth century that include his reflections on his extraordinary life, his service to the Confederacy, and his beloved wife of fifty-six years.

Emerson's introduction examines Feilden's background and character and the reasons behind his choice to fight for the Confederacy. It also delves into Feilden's astute assessment of Confederate capabilities late in the war and his decision to benefit financially from blockade running.


W. Eric Emerson is the director of the South Carolina Department of Archives and History in Columbia. Emerson is the author of Sons of Privilege: The Charleston Light Dragoons in the Civil War and the coeditor of Faith, Valor, and Devotion: The Civil War Letters of William Porcher DuBose. He also has served as the director of the Charleston Library Society and the South Carolina Historical Society.

"Scholarly publications dealing with the Civil War in the South Atlantic theater, especially in the sphere of military operations, still lag far behind those associated with the other major regions of conflict, making A Confederate Englishman a welcome addition to this sporadic literature."—Civil War Books and Authors

"Henry Wemyss Feilden's Civil War letters spin an engaging tale of wartime deprivations in Charleston and of a love affair that led to a rewarding marriage that lasted for the rest of Feilden's long and eventful life. Feilden's astute recounting of events and personalities during his sojourn in the American South make his letters an important addition to the wealth of primary sources for that era."—Gordon C. Rhea, author of The Battle of the Wilderness, May 56, 1864; The Battles for Spotsylvania Court House and the Road to Yellow Tavern, May 7-12, 1864; and To the North Anna River: Grant and Lee, May 13-25, 1864

"Feilden's frank and vivid letters have been rescued from several different sources. As a Confederate staff officer he traveled widely and experienced and observed much of military and civilian life in South Carolina, Georgia and Florida in the last years of the war. This book is a significant addition to our primary knowledge of the Confederate experience."—Clyde N. Wilson, University of South Carolina and editor of The Papers of John C. Calhoun

"Henry Feilden remains one of the most gallant and charming Englishmen ever to have crossed the Atlantic. As a foreign eyewitness, and volunteer in the Confederate army, his name should stand alongside that of Colonel Arthur Fremantle and Heros Von Borcke. This new edition of Feilden's letters is a deserving accolade to his contribution to Civil War history."—Amanda Foreman, author of A World on Fire: Britain's Crucial Role in the American Civil War

"A Confederate Englishman reads more like fiction than the actual letters of Confederate Captain Henry Wemyss Feilden who resigned his British army commission, ran the blockade, served as an officer in Charleston, SC, and married a South Carolina woman. These letters provide a rare window onto the War in Charleston."—Richard W. Hatcher III, Historian, Fort Sumter National Monument

"Feilden's letters make for a very informative and enjoyable read. The detailed correspondence on the blockade and land campaigns will be of great interest to the military historian, while its engaging style and level of personal detail commend it to the general public."—Joe Long, curator of education, South Carolina Confederate Relic Room and Military Museum

"For too long scholars have ignored lesser-known Europeans who joined the Confederacy. One of the most interesting of these is Henry Wemyss Feilden (1838–1921). He was a British officer, botanist, and gentleman, whose service to the crown lasted very nearly a century. His service to the Crown included a polar expedition. Like much of the British aristocracy he identified with the Southern elite. He served as an aide with Gen. P.G.T. Beauregard in the Department of the South and married Miss Julia McCord, the daughter of lawyer and Editor David J. McCord. In 1864 he aptly described the perilous military situation facing the Confederacy on James Island. His description of combat operations deals with the Department of South Carolina, Georgia, and Florida. In the end, he left for home disillusioned. However, his experiences in the Confederacy would draw his favorable attention to Imperial planners.This superb collection will help fill this scholarly void. Only those who have edited such letters will fully appreciate the tender loving care and work that went into this effort. It is a delightful read and its appeal will go well beyond the academy."—Edward L. Drago