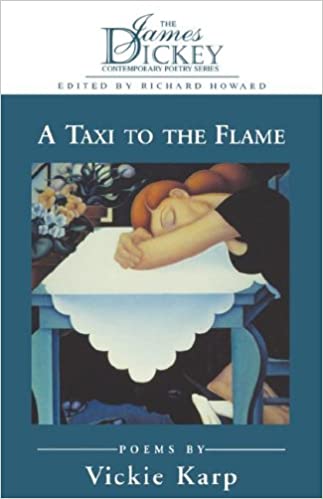 A Taxi to the Flame

A Taxi to the Flame is a journey through the streets of New York City, foreign landscapes, and past and present events. From rattling Manhattan subways where underground riders transform on Halloween night, to suburban mornings in which a hedge clipper neatens a waking vision of the world, the poems are a love story of destinations met, people remembered, and places found at the intersections of words and dreams.

This first collection of Vickie Karp's poems contains a decade of work that has appeared in magazines and journals such as the New Yorker, New Republic, New York Review of Books, Yale Review, and New York Times.

Vicki Karp was born in New York City in 1953 and educated at Queens College of the City University of New York. Currently a senior writer for New York public television, she was formerly on the editorial staff of The New Yorker and has been the recipient of numerous awards, including a National Endowment for the Arts fellowship for 1994.