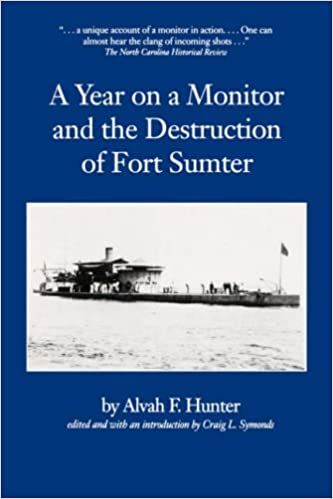 A Year on a Monitor and the Destruction of Fort Sumter

"This memoir begins with the sixteen-year-old Hunter's plaintive efforts to enlist in the Navy. At a time when the Union was about to announce its first conscription, young Hunter is told the Navy has no need for him. But he perseveres and is 'rewarded' by an appointment to the monitor Nahant as a wardroom boy. Hunter thus becomes an intelligent and articulate observer at the very bottom of the Navy's pecking order. As a novice to naval life, Hunter takes pains to describe in detail the day-to-day aspects of working and living on an ironclad monitor—a type of vessel whose life span was very short. The accuracy of his memory is assured by the fact that he compiled his narrative from a diary that he kept during the war."
—Craig L. Symonds, History Professor, U.S. Naval Academy at Annapolis, Maryland.

At the age of 16, Alvah F. Hunter enlisted in the Navy and was assigned to a Union Civil War monitor. He engaged in 19 sea battles, principally in the destruction of the batteries that protected Charleston, S.C., thereby closing the ports to blockade runners. In 1863, he received an honorable discharge as a "1st Class Cabin Boy." The following year, he joined the Signal Corps of the Army, where he served until the war was over. He later married and became a father and a successful businessman, although he is known to Civil War historians solely on the basis of his manuscript, A Year on a Monitor and the Destruction of Fort Sumter. The manuscript is believed to have been written during the war or shortly thereafter and is virtually the only writing in print by an enlisted person during the Civil War era.

"In November of 1862, Alvan Hunter, then a youth of sixteen, signed on as 'ship's boy' aboard the monitor Nahant. His year's service aboard the warship allowed the young man to witness, among other things, the abortive April 1863 Union attack on Fort Sumter, the capture of the Confederate ram Atlanta, and the naval and military actions against Fort Wagner and Morris Island. A Year on a Monitor and the Destruction of Fort Sumter is his memoir of this exciting time."—Southern Historian

". . . It is a pleasure to welcome the publication of A Year on a Monitor. This account of an individual's experiences and observations is a truly important contribution to naval history."—American Neptune

"Memoirs of Civil War naval service by enlisted men are rare. The publication of this volume. . . is a major contribution to such collections. As a 'boy,' Hunter was permitted more freedom than most sailors; he explored the ironclad vessel, observing the ship's machinery, naval tactics, and shipboardlife. During his year in the navy, Hunter kept a diary; it recorded such vivid entries that 60 years later he was able to write this memoir as a gift to his grandchildren. Civil War students and scholars at all levels will rejoice in this worthy addition to the literature."—Choice