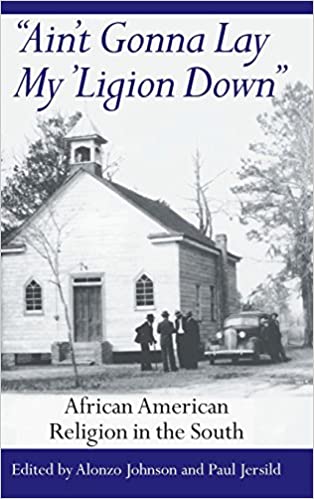 Ain't Gonna Lay My 'Ligion Down

African American Religion in the South

"Ain't Gonna Lay My 'Ligion Down" reveals the ways that African Americans have "put flesh on their Christian beliefs," adapting the faith of their European American masters and creating distinctive forms of religious expression. Contributors to the volume examine specific examples of African American religious practice and church leadership to show the remarkable degree to which newly imported slaves preserved their African spiritual heritage while simultaneously meshing it with Western symbols and theological claims.


Alonzo Johnson is a systematic theologian who holds a Ph.D. from Union Theological Seminary in New York City. He is assistant professor of religious studies at the University of South Carolina and an ordained minister in the Church of God in Christ.

Paul Jersild is professor of theology and ethics and co-director of the Center on Religion in the South at Lutheran Theological Southern Seminary in Columbia, South Carolina.

"It represents the fruit of a creative and well-conceived collaborative effort that makes a significant scholarly contribution. It is also an excellent model for those who wish to do similar research in the coming millennium."—Journal for the Scientific Study of Religion