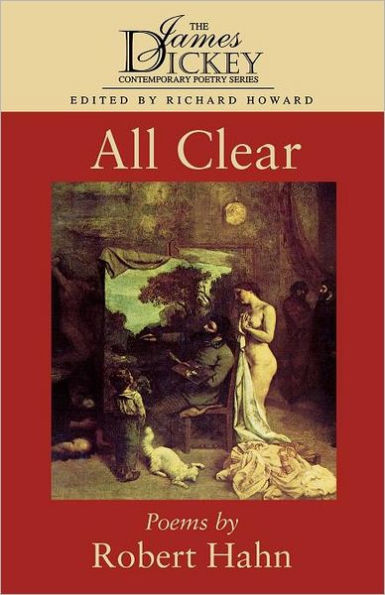 Although All Clear will serve as an introduction to Robert Hahn for many readers, this accomplished poet has been perfecting his craft for a quarter of a century. With this colleciton Hahn offers poems that range from sestinas to sharp-edged lyrics, from the meditative drift of "Attending" to the intricate precision of "False Dawn." The settings in All Clear shift from the pastoral to the urban, from Wellfleet Harbor to a Paris street, from an operating room to Chavez Ravine. The figures in the book, including John Huston, Bix Beiderbecke, and J. M. S. Turner, are often artists who altered perceptions of reality by creating their own separate worlds. Ultimately, the radiance of All Clear creates its own transforming vision of the world as we find it.

Robert Hahn is the author of three previous poetry collections, including the chapbook One More Time. His poems have appeared in numerous periodicals including Paris Review, Southwest Review, New Republic, Harper's TriQuarterly, Chicago Review, and Iowa Review. Hahn lives in Johnson, Vermot, where he is president of Johnson State College.

"A stunning book, the work of a philosophic mind which is fascinated by the idea of truth and by the question of where to corner it. Hahn's mazy style, which can make good use even of the outrageously ruminative sestina form, weaves through the treasuries of concrete evocation without ceasing to develop its thought. Among the marvels of this book is [Hahn's] ability to express the nearly inexpressible."—Richard Wilbur

"As line veers into line, stanza into stanza, these intelligent, fully composed, deeply seen poems deliver us, through their clarity, to a state of ravishing surprise."—Rosanna Warren