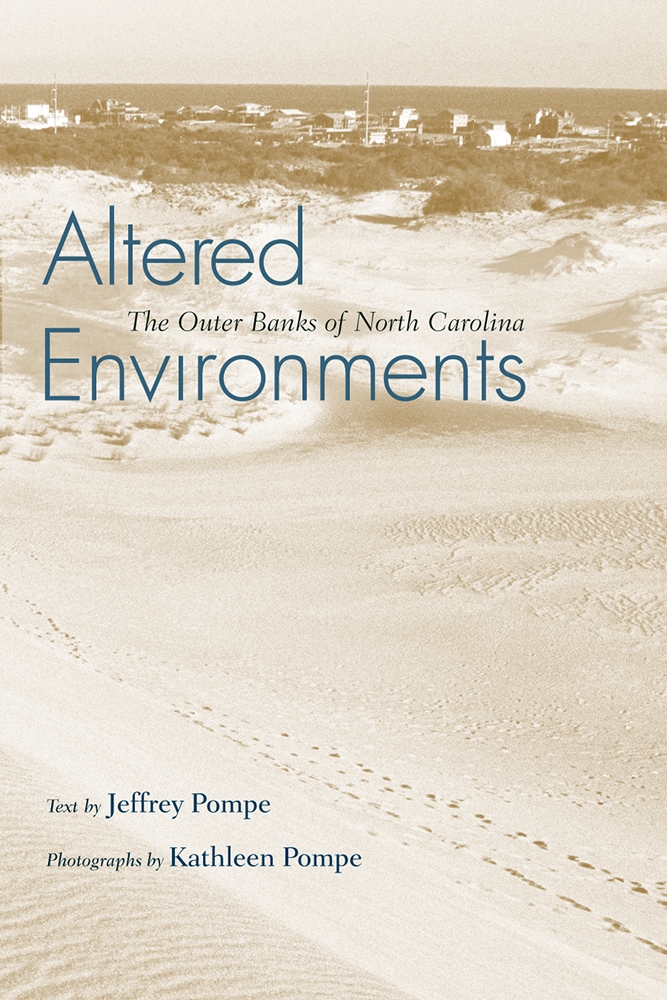 The Outer Banks of North Carolina

The constant assault of natural forces make fragile barrier islands some of the most rapidly changing locations in the world, but human activities have had enormous impact on these islands as well. In Altered Environments, Jeffrey and Kathleen Pompe explore the complex interactions between nature and human habitation on the resilient Outer Banks of North Carolina. The Pompes employ modern and historical photographs and maps to illustrate the geographic and ecologic changes that have taken place on the Outer Banks, evaluating efforts to preserve these lands and also meet the evolving needs of a growing population.

The Pompes examine the various forces that have created an environment so very different from the Outer Banks of only a few decades ago. The defining event in the reshaping of the islands for expanded development was the dune-construction project of the 1930s, when the Civilian Conservation Corps constructed a wall of self-sustaining dunes along 125 miles of Outer Banks shoreline in an effort to stave off beach erosion. This event created a historical demarcation in conservation efforts and heralded the beginning of a period of rapid economic development for the Outer Banks. The construction project reshaped the islands' geography to accomplish perceived economic advantages and prepared the Outer Banks for the last half of the twentieth century, when tourists increasingly visited this shore, bringing corresponding developments in their wake. The dune-restoration project is just one of the Pompes' examples of how human actions have altered the islands to meet the demands of a growing number of visitors and residents.

While Altered Environments focuses on the Outer Banks, the narrative also considers social, environmental, and economic issues that are relevant to much of the seashore. Most coastal communities face similar problems, such as natural disasters and shoreline erosion, and in recent decades rapid population growth has exacerbated many conservation problems. Real-estate developments, the fisheries industry, tourism, climate change, and oil exploration all come under scrutiny in this investigation. Using the Outer Banks as a case study to frame a host of environmental challenges faced along the Atlantic seaboard today, the Pompes provide a valuable commentary on the historical context of these concerns and offer some insightful solutions that allow for sustainable communities.


Jeffrey Pompe is a professor of economics at Francis Marion University in Florence, South Carolina, where he is the Nellie Cooke Sparrow Professor of Business and University Trustee Research Scholar. He is coauthor of Environmental Conflict: In Search of Common Ground.

Kathleen Pompe is a professor of art at Francis Marion University. Her photography has been exhibited extensively in one-person, invitational, and juried art shows throughout the United States, and her photographs have appeared in many books and journals.

"Altered Environments is a fascinating and cautionary tale about living on shifting sands. In well-chosen words and images, Jeffrey and Kathleen Pompe chronicle the complex relationship between humans and the ever-changing Outer Banks, a story with implications beyond this audacious protrusion into the Atlantic. As we confront the daunting challenge of climate change, Altered Environments conveys an important message about humility, stewardship, adaptability, and hope."—Dana Beach, Coastal Conservation League