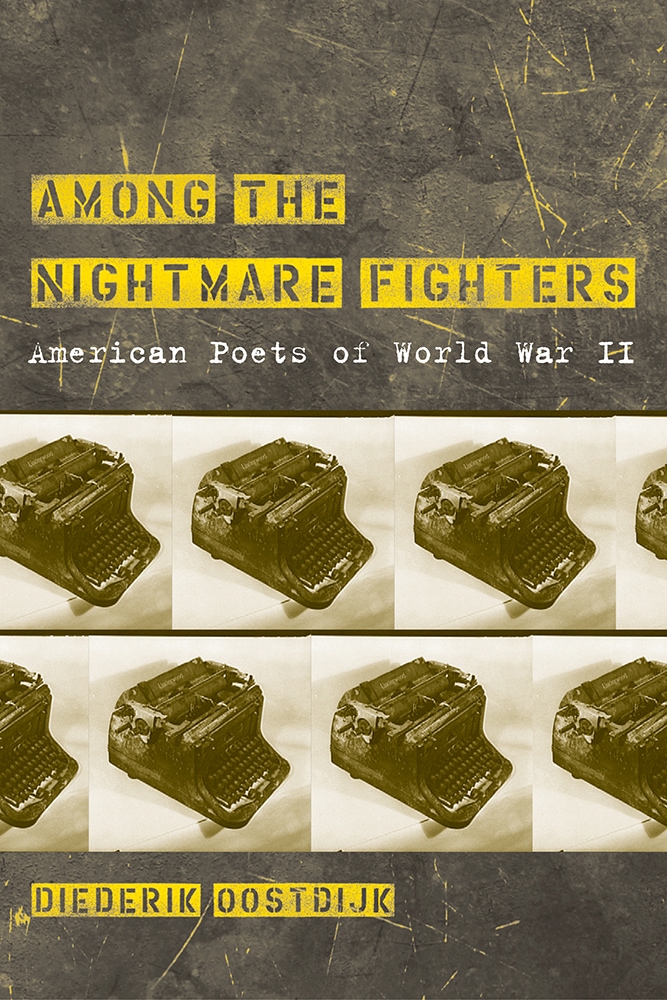 Among the Nightmare Fighters

In the first comprehensive study of the American male poets of World War II, Diederik Oostdijk gives voice to the literary men still considered to be a part of the Silent Generation. Focusing not only on soldier poets, but also on conscientious objectors and those deemed unfit for military service, Among the Nightmare Fighters sheds light on the struggles faced by writers—including Randall Jarrell, Anthony Hecht, Robert Lowell, Howard Nemerov, William Stafford and others—from the onset of the U.S. involvement in the war in Europe to the painful physical and psychological aftereffects soldiers carried with them following their service years.

Enriched with extensive historical and personal background information drawn from the poets' archives, Oostdijk's study explores the internal confusion expressed by the World War II poets who felt overshadowed by the past generation of Great War poets in their own conflicts with notions of identity, manhood, and the haunting aftermath of war. Collectively their poems form an important and sobering antidote to the sometimes overly positive celebrations of the Good War and the Greatest Generation, recapturing some of the anxiety, frustration, and bitter sadness that the war years also occasioned.

Oostdijk demonstrates the importance of appreciating these men not only as a collective literary group, but also as solitary writers experiencing the hardships and adversities of war on an individual level. He emphasizes each author's distinctive perceptions of the disasters they witnessed and the conflicts they witnessed—such as Karl Shapiro's struggle with his Jewish identification, James Dickey's fascination with the meaning and projection of manhood, Nemerov's perception of war's effect on American society, and Ciardi's preoccupation with traumatizing combat memories. A factor that connected these men in their responses to war was their overreaching efforts to identify as individuals and not merely as blurred faces among the myriad combatants, a goal that Oostdijk acknowledges in recognizing the unique experiences of his subjects as key to interpreting their poetry.

Among the Nightmare Fighters has both literary and historical merits as a means to comprehend in a more detailed manner the events that took place on the battlefields and the home front and the psychological effects World War II had on the returning American soldiers. Oostdijk's study echoes with the whispers of these American poets and recognizes the significance their work had on literary history in their time and since.


Diederik Oostdijk is an associate professor at the VU University in Amsterdam. He is the coeditor of Tales of the Great American Victory: World War II in Politics and Poetics, based on an international conference, "The Stories of World War II," that he organized in Amsterdam in 2004. He has published more than a dozen journal articles and book chapters on American poetry and culture.

"Drawing on a wealth of primary materials, Diederik Oostdijk offers a well-researched, carefully organized, and highly detailed study of the so-called 'Silent Generation' of American poets in relation to their experiences in World War II. This volume dramatically demonstrates how and why the war poets of this generation went largely unheard during the war and were largely dismissed in the subsequent decades. Beyond that Oostdijk brings sensitive understanding to these poets' perspectives on the enervating, disorienting, and ultimately shattering impact of war. With immense dignity—sometimes with humor and charm, sometimes with irony and anger—the poets, as Oostdijk continually demonstrates, undermine any idea that warfare could have a salutary effect on anyone. Scholars and students of the literature of warfare, and of World War II in particular, will find this study an essential work."—Edward Brunner, Southern Illinois University Carbondale

"Diederik Oostdijk's Among the Nightmare Fighters offers a detailed and lucid exploration of many of the poets of World War II. It engages with debates about the ethics of witnessing and representing trauma, and draws connections among these poets through astute close readings of poems, letters, diary entries, and unpublished drafts."—Ruth Hawthorn, PN Review

"Diederik Oostdijk's Among the Nightmare Fighters is a timely and all-too-rare exploration of war poetry by the best-known American poets who treat the Second World War. Oostdijk plumbs the archive to consider the role of the war in the work of the poets and the work of these poets. It provides an engaging exploration of their anxious struggles to establish their vision and authority. He does us all a favor by reexploring the canon, combing the archives, and broadening our vision of the Second World War."—Philip Metres, Contemporary Literature

"Scrupulously researched and enhanced by archival material, Among the Nightmare Fighters aims to rescue from neglect the generation of U.S. poets who came of age during WWII. Demonstrating a wide knowledge of his broader subject—war and poetry—Oostdijk's book is free of academic jargon, personal, and enlightening. Highly recommended."—Barry Wallenstein, Choice Reviews