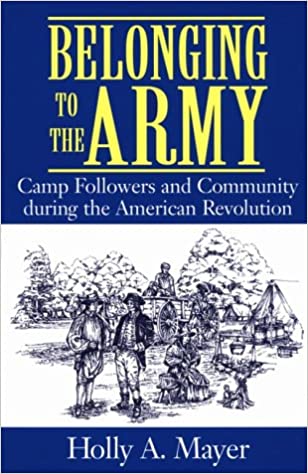 Belonging to the Army

Camp Followers and Community During the American Revolution

Belonging to the Army reveals the identity and importance of the civilians now referred to as camp followers, whom Holly A. Mayer calls the forgotten revolutionaries of the War for American Independence. These merchants, contractors, family members, servants, government officers, and military employees provided necessary supplies, services, and emotional support to the troops of the Continental Army. Mayer describes their activities and demonstrates how they made encampments livable communities and played a fundamental role in the survival and ultimate success of the Continental Army. She also considers how the army wanted to be rid of the followers but were unsuccessful because of the civilians' essential support functions and determination to make camps into communities. Instead the civilians' assimilation gave an expansive meaning to the term "belonging to the army."

After four years on active duty in the U.S. Army, Holly A. Mayer returned to school to earn her Ph.D. at the College of William and Mary in Virginia. She is associate professor of history at Duquesne University in Pittsburgh.

"A well-researched, detailed look into the revolutionary era's military-civilian community. The book is a significant contribution to our growing understanding of the American military's complex social history."—The Journal of American History