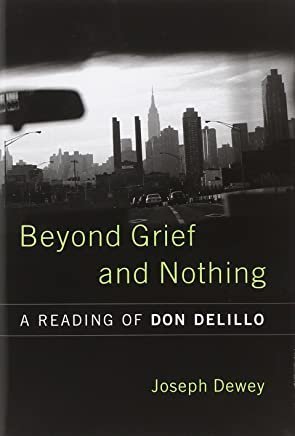 Beyond Grief and Nothing

A Reading of Don Delillo

An introduction to the prolific novelist's creative concerns with the street, the word, and the soul

In the closing decade of the twentieth century, Don DeLillo emerged from the privileged status of a writer's writer to become by any measure—productivity, influence, scope, gravitas—the dominant novelist of fin de millennium America. With a series of landmark titles beginning in 1982 with The Names and continuing with White Noise and Underworld, DeLillo defined himself as a provocative, articulate anatomist of American culture. In Beyond Grief and Nothing: A Reading of Don DeLillo, Joseph Dewey offers an astute assessment of this daunting yet important writer's four-decade cultural critique. Dewey finds DeLillo's concerns to be organized around three rubrics that mark the writer's own creative evolution: the love of the street, the embrace of the word, and the celebration of the soul.

Measuring the full weight of DeLillo's narrative achievement, Dewey takes the reader through the novelist's hip avant-garde satires of the mid-1960s, his dense interrogations of the power of language and the spell of narrative in the 1980s and 1990s, and his recent efforts to transcend the narrow parameters of the immediate. Dewey explores, among other relevant topics, DeLillo's fascination with Eastern philosophies, interest in Native American traditions, passion for jazz, and deep roots in Roman Catholicism.

Written to present an open and helpful reading of this demanding literary figure, Beyond Grief and Nothing traces DeLillo's achievement in a careful chronology of artistic progression. By grounding his reading in the texts themselves (novels, plays, and many of the short stories), Dewey develops an insightful arc, a thematic trajectory that takes understanding of DeLillo into significant new directions and offers a compelling and satisfying introduction to his long literary career.


An associate professor of American literature at the University of Pittsburgh at Johnstown, Joseph Dewey is the author of Understanding Richard Powers, Novels from Reagan's America: A New Realism, and In a Dark Time: The Apocalyptic Temper in the American Novel of the Nuclear Age and coeditor of UnderWords: Perspectives on Don DeLillo's Underworld.

"Don DeLillo ranks easily among the handful of most important postwar novelists in America, yet he has not had the kind of sustained critical treatment that he deserves, one that examines the range of his work with fidelity to the texts and a counterbalancing imagination. In this fine book, Joseph Dewey has gone a long way toward accomplishing this task. By any standards, this is a brilliant study, and one likely to stand as a seminal work on this important writer. It's both an intelligent introduction for readers as yet unfamiliar with the lay of DeLillo's land and a sophisticated reading of the fiction—its uplands and lowlands—that will inspire even the most devoted fans. I strongly recommend this book."—Jay Parini, D.E. Axinn Professor of English and Creative Writing, Middlebury College