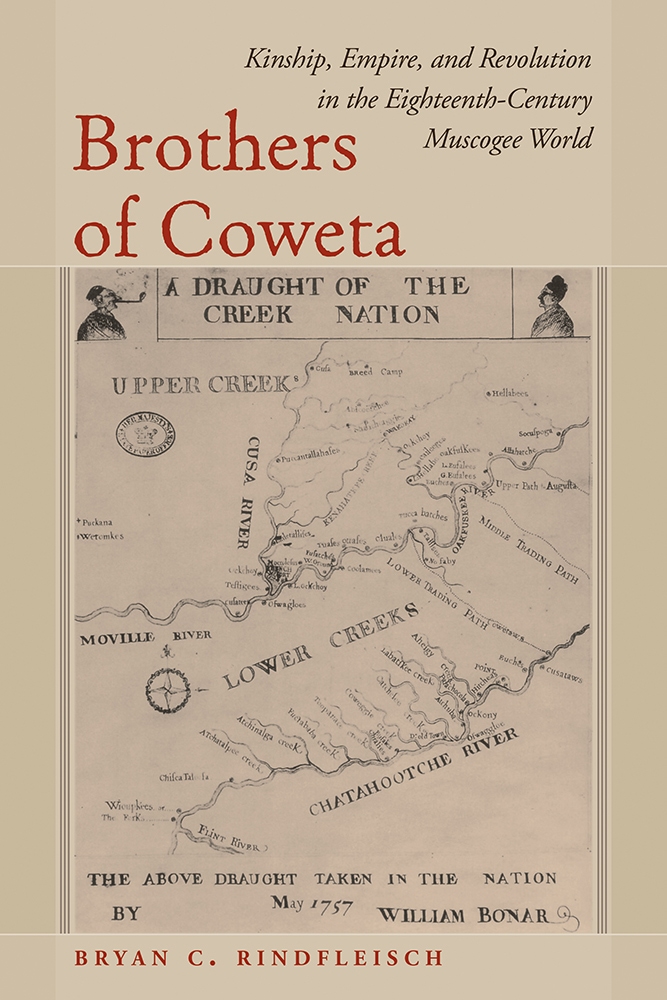 Kinship, Empire, and Revolution in the Eighteenth-Century Muscogee World

In Brothers of Coweta Bryan C. Rindfleisch explores how family and clan served as the structural foundation of the Muscogee (Creek) Indian world through the lens of two brothers, who emerged from the historical shadows to shape the forces of empire, colonialism, and revolution that transformed the American South during the eighteenth century.

Although much of the historical record left by European settlers was fairly robust, it included little about Indigenous people and even less about their kinship, clan, and familial dynamics. However, European authorities, imperial agents, merchants, and a host of other individuals left a surprising paper trail when it came to two brothers, Sempoyaffee and Escotchaby, of Coweta, located in what is now central Georgia. Though fleeting, their appearances in the archival record offer a glimpse of their extensive kinship connections and the ways in which family and clan propelled them into their influential roles negotiating with Europeans. As the brothers navigated the politics of empire, they pursued distinct family agendas that at times clashed with the interests of Europeans and other Muscogee leaders.

Despite their limitations, Rindfleisch argues that these archives reveal how specific Indigenous families negotiated and even subverted empire-building and colonialism in early America. Through careful examination, he demonstrates how historians of early and Native America can move past the limitations of the archives to rearticulate the familial and clan dynamics of the Muscogee world.


Bryan C. Rindfleisch is an assistant professor of history at Marquette University. He is the author of George Galphin's Intimate Empire: The Creek Indians, Family, and Colonialism in Early America.

"Rindfleisch has provided a useful and interesting story about one Muscogee family's navigation of colonialism and empire that students of Indigenous history will find helpful."—The Journal of Southern History

"Brothers of Coweta is both a history of Muscogee people living in the long eighteenth century and an incisive investigation into the power of kinship and family to shape Native politics, British policy, and American expansion. Through the lives and political savvy of two Native brothers, Sempoyaffee and Escotcha, Rindfleisch uncovers intimate and seldom told stories about violence and resilience that transformed the early American South."—Alejandra Dubcovsky, University of California, Riverside

"In elegant prose, Bryan Rindfleish offers a new perspective on Muscogee (Creek) history through the lens of kinship, family, and town as he traces the lives two of the best-known Creek micos of the eighteenth century. Thoroughly researched and filled with insight, the author has delivered another compelling addition to Muscogee (Creek) historiography."—Kathryn H. Braund, Auburn University