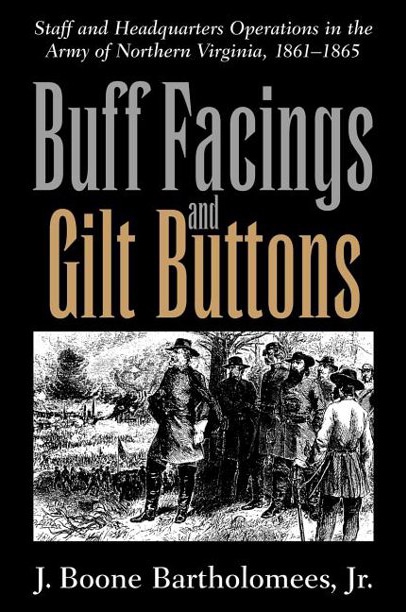 Staff and Headquarters Operations in the Army of Northern Virginia, 1861-1865

Buff Facings and Gilt Buttons approaches topics familiar to Civil War readers from a unique perspective—that of the staff. J. Boone Bartholomees, Jr., examines how the staff officers of Robert E. Lee's Army of Northern Virginia and its subordinate corps, divisions, and brigades were selected, trained, and organized and explores what staff officers did, how they did it, and how effective they were. Bartholomees surveys the entire scope of Army of Northern Virginia staff operations from quartermaster and commissary duties to medical and routine administrative functions to intelligence, command and control, and combat operations. He assesses the major problems faced in each functional area and the degree of success achieved armywide and at subordinate headquarters. Bartholomees concludes that, although the Army of Northern Virginia's staff system reflected more the traditional personal style of staff operations than the modern system that was emerging in Europe at the time, the staff nonetheless managed to keep a large army in the field for four years under difficult conditions.

J. Boone Bartholomees, Jr., is a professor of military history at the United States Army War College at Carlisle Barracks, Pennsylvania, and the author of U.S. Army War College Guide to National Security Policy and Strategy.

"J. Boone Bartholomees has produced a comprehensive and highly readable study of the Army of Northern Virginia's staff and its headquarters' operations throughout the entire war."—Civil War News

"This first substantive study of Civil War staff work is a truly original and worthwhile addition to the literature, one that we hope will spur further scholarship on the inner workings of the Union and Confederate armies."—Journal of American History

"Bartholomees's detailed, informative book is worth the attention of every historian of the Civil War era."—North Carolina Historical Review