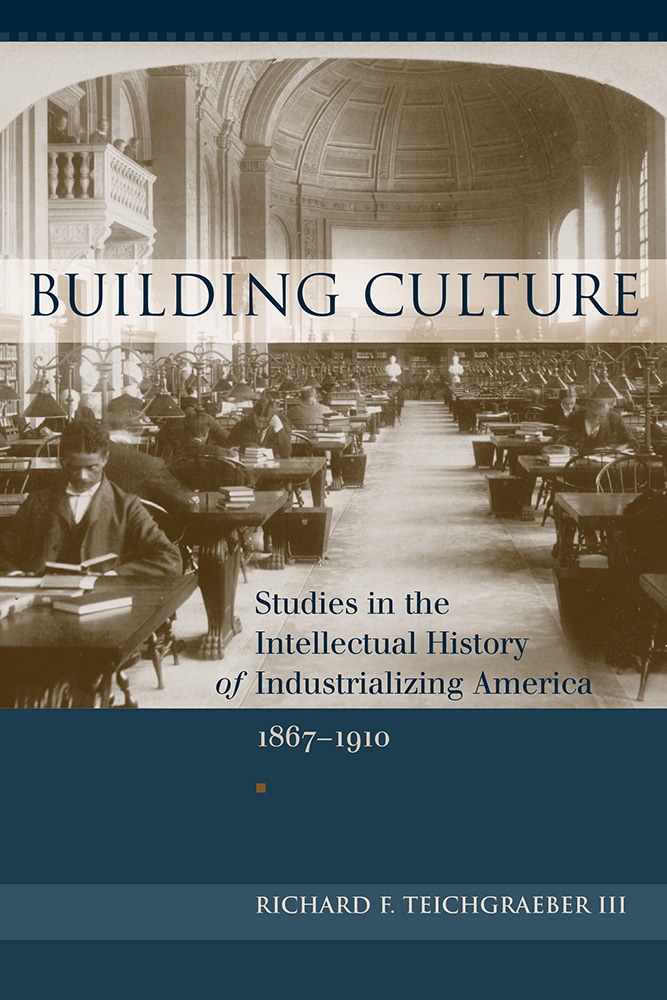 Studies in the Intellectual History of Industrializing America, 1867-1910

An unprecedented wave of interest in building new cultural institutions swept through America from the end of the Civil War through the first decade of the twentieth century. Traditionally historians have told us that this sea change was the work of various elites intent on controlling the turmoil and divisions that accompanied the industrialization of the American economy. In Building Culture, Richard Teichgraeber rejects this hierarchical account to pursue one that highlights the multiplicity of attitudes and interests that were on display in America's first great effort to build national cultural institutions.

Teichgraeber also lays the groundwork of a new interpretive framework for understanding this multisided effort. Most native-born American champions of "culture," he contends, viewed it as an authentically individualistic ideal. For them the concept continued to carry its antebellum meaning of self-culture—that is, individual self-development or self-improvement—and thus was quite resistant to closure around any single fixed definition of what being cultivated might mean. They also recognized that in America culture had to connect with the choices of ordinary men and women and therefore had to be fashioned to serve the uses of a democratic rather than an aristocratic society.

To show how and why this inclusive view of culture was accompanied by a prodigious expansion of American cultural institutions, Teichgraeber also explores two of the central but still inadequately mapped developments in the intellectual and cultural history of the industrial era: the multifaceted—and ultimately successful—effort to secure Ralph Waldo Emerson a central place in American culture at large; and the growth and consolidation of the American university system, certainly the most important of the new cultural institutions built during the industrial era.

Elegantly written and featuring twenty-two illustrations, Building Culture expands our knowledge of the formation of modern American culture and opens new paths of inquiry into contemporary cultural and intellectual concerns.


Richard F. Teichgraeber III is a professor of history at Tulane University. He is the author of "Free Trade" and Moral Philosophy: Rethinking the Sources of Adam Smith's Wealth of Nations and Sublime Thoughts / Penny Wisdom: Situating Emerson and Thoreau in the American Marketplace and coeditor with Thomas L. Haskell of The Culture of the Market: Historical Essays.

"Teichgraeber takes a much more sanguine view of culture, character and causality in Building Culture: Studies in the Intellection History of Industrializing America, 1867-1910."—Jennie A. Kassanoff, Guilt Stricken: The Interdependencies of the Gilded Age

"Building Culture expands on Teichgraeber's earlier work to offer important insights on the meanings of 'culture' in American intellectual life in the age of industrialization and sectional reunification. Teichgraeber makes particularly compelling use of two primary examples—the elevation of Ralph Waldo Emerson as the chief voice of American culture for his generation and the infusion of the American universities into public life as agencies of enlightening reform and academic freedom. This exploration of foundational episodes in the history of American culture is well grounded in the author's original research as well as thoughtful readings of the extant literature, and it is certain to be of great interest to scholars in history, literature, education, communication, American studies, and cultural theory.""—Lewis Perry, author of Boats Against the Current: American Culture Between Revolution and Modernity, 1820–1860 and Intellectual Life in America: A History