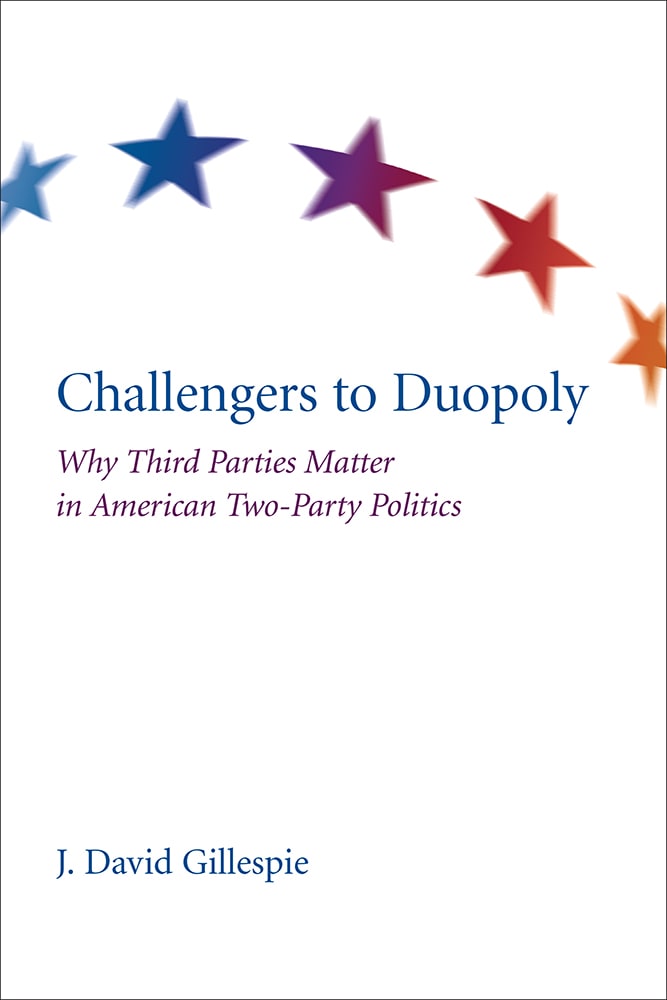 Building on the foundational importance of its predecessor (Politics at the Periphery, 1993), Challengers to Duopoly offers an up-to-date overview of the important history of America's third parties and the challenge they represent to the hegemony of the major parties. J. David Gillespie introduces readers to minor partisan actors of three types: short-lived national parties, continuing doctrinal and issue parties, and the state and local significant others. Woven into these accounts are profiles of some of the individuals who have taken the initiative to found and lead these parties. Ross Perot, Ralph Nader, Jesse Ventura, and other recent and contemporary electoral insurgents are featured, along with the most significant current national and state parties challenging the primacy of the two major parties.

Gillespie maintains that despite the infirmities they often bear, third parties do matter, and they have mattered throughout American public life. Many of our nation's most important policies and institutional innovations—including abolition, women's suffrage, government transparency, child labor laws, and national healthcare—were third-party ideas before either major party embraced them. Additionally, third parties were the first to break every single de facto gender, race, and sexual orientation bar on nomination for the highest offices in the land.

As Gillespie illustrates in this engaging narrative, with the deck so stacked against them, it's impressive that third-party candidates ever win at all. That they sometimes do is a testament to the power of democratic ideals and the growing distain of the voting public with politics as usual.


J. David Gillespie teaches political science at the College of Charleston and the Citadel. Selected as the 1993 Carnegie-Case South Carolina Professor of the Year, Gillespie was a member of the Presbyterian College faculty in political science from 1979 to 2006 and that institution's vice president for academic affairs from 1997 to 2005. He has written extensively on third parties and has provided testimony in federal and state ballot access cases.

"Gillespie's book should satisfy the curiosity of both the average citizen and the interested student of politics. This is a fine introduction to the subject and a valuable aid to general readers."—Library Journal

"Gillespie has produced a lively discussion of American third parties past and present. His book is a handy reference of descriptions of the many smaller parties that have enlivened the political scene."—Choice

"Besides recovering the story of fringe politics in the past, Gillespie probes the psychology—the paranoias, idealism, and hatreds—of third-party candidates and voters."—Booklist

"Sympathetic to the impulses that spark American third parties—which are 'driven so often by a vision of what should be'—if not always sympathetic with sentiments that are 'mean-spirited, nasty, even downright dangerous, Gillespie has written a readable introduction to the subject."—Washington Times

"This book would be an excellent supplementary text for a course on parties or policy agenda development in the Unites States, as it would provide students a comprehensive look at the party system that exists beyond the Republican-Democratic duopoly."—Natalie Jackson, "American Review of Politics," Fall 2012