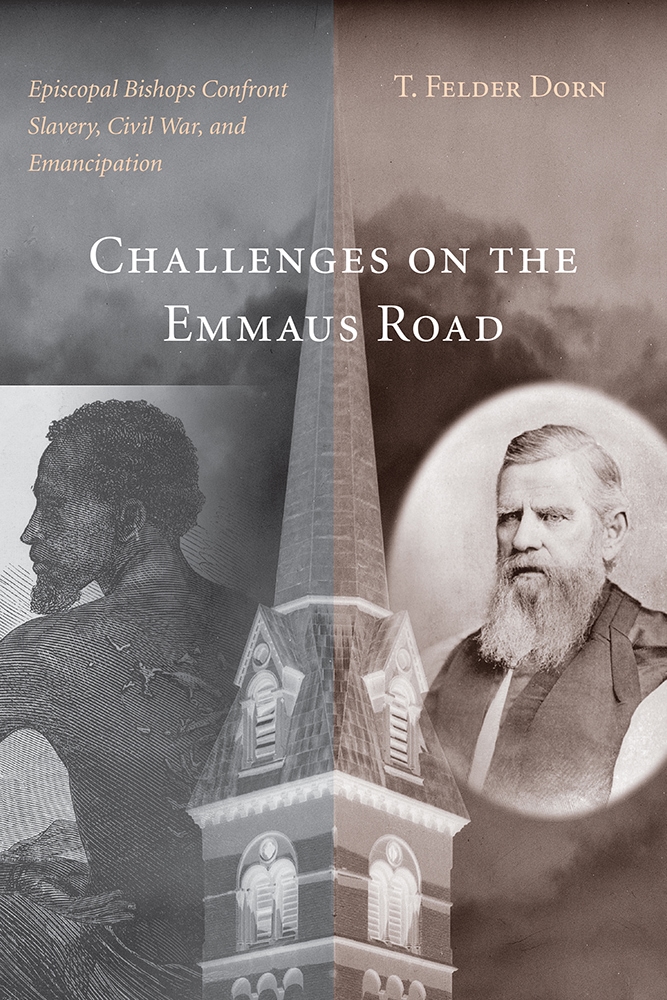 Challenges on the Emmaus Road

While slavery and secession divided the Union during the American Civil War, they also severed the Northern and Southern dioceses of the Protestant Episcopal Church. In Challenges on the Emmaus Road, T. Felder Dorn focuses on the way Northern and Southern Episcopal bishops confronted and responded to the issues and events of their turbulent times.

Prior to the Civil War, Southern bishops were industrious in evangelizing among enslaved African Americans, but at the same time they supported the legal and social aspects of the "peculiar institution." Southern and Northern bishops parted company over the institution of slavery, not over the place of blacks in the Episcopal Church. As Southern states left the Union, Southern dioceses separated from the Episcopal Church in the United States.

The book's title was inspired by the Gospel of Luke 24:13-35 in which the resurrected Jesus Christ walked unrecognized with his disciples and discussed the events of his own crucifixion and disappearance from his tomb. Dorn perceives that scriptural episode as a metaphor for the responses of Episcopal bishops to the events of the Civil War era.

Dorn carefully summarizes the debates within the church and in secular society surrounding the important topics of the era. In doing so, he lays the groundwork for his own interpretations of church history and also provides authentic data for other church scholars to investigate such topics as faith and doctrine, evangelism, and the administrative history of one of the most important institutions in America. Dorn devotes the final chapters to the postwar reunification of the Episcopal Church and Southern bishops' involvement in establishing the Commission on Freedmen to offer help with the educational and spiritual needs of the recently emancipated slaves.


T. Felder Dorn began his academic career in Sewanee, Tennessee, on the faculty of the University of the South. He retired as Dean Emeritus from Kean University in Union, New Jersey, where he held positions as professor of chemistry, dean, and vice president. He is the author of The Tompkins School: 1925–1953, A Community Institution; The Guns of Meeting Street: A Southern Tragedy; and Death of a Policeman, Birth of a Baby: A Crime and Its Aftermath.

"While historians are hesitant to brand any study as the final word on a particular topic, it is hard to imagine anyone producing a piece of scholarship on this topic that would eclipse Dorn's masterfully crafted chronicle."—Jonathan A. Noyalas, Civil War News

"Dorn has allowed the leading figures to speak for themselves giving us a clean window into those times unclouded by contemporary interpretations. This work is far more significant than the history of a particular denomination for it speaks with candor and clarity of irreconcilable differences that were transcended in the end by faith. Having taught this subject for many years I can only lament that this work was not available at that time."—C. FitzSimons Allison, 12th Bishop of South Carolina (ret.)

"For those interested in the voluminous records left by nineteenth-century Episcopal leadership, Dorn's book will be the place to look first: his research is, quite simply, prodigious."—Luke E. Harlow, Journal of Southern Religion

"In Challenges on the Emmaus Road, Felder Dorn provides us with a treasure trove of information about the Episcopal Church and slavery during the period surrounding the Civil War. His profiles of the bishops of the church, particularly in the slaveholding states, are fair, comprehensive and meticulously documented. He writes with great clarity, allowing readers to make their own conclusions."—The Rev. Andrew G. Kadel, director of the Christoph Keller, Jr. Library of the General Theological Seminary of the Episcopal Church, New York.

"The ministry of Episcopal bishops provides the lens through which T. Felder Dorn presents an interesting and well researched look at the challenging issues during the American Civil War era. A must read for understanding the context and complexity of the role of The Episcopal Church during this period."—The Right Reverend Thomas C. Ely, Episcopal Diocese of Vermont

"Adding to a wealth of recent works examining the role of organized religion in the politics of slavery and secession, Dorn offers a thoroughly researched and engagingly written look at Protestant Episcopal bishops during a period of great turmoil."—Timothy Wesley, Journal of the Civil War Era

"T. Felder Dorn offers a thorough history of The Episcopal Church's Bishops, North and South, in the years around the Civil War, letting the primary sources speak clearly for themselves. He gently exposes the shameful paradox with which the bishops lived in relationship to African-Americans: 'Equal in God's eyes but not in the sight of man.'"—The Right Reverend Scott Anson Benhase, Bishop, Diocese of Georgia

"In this workmanlike, thorough, and largely dispassionate study, Dorn has made a great contribution."—Sewanee Theological Review