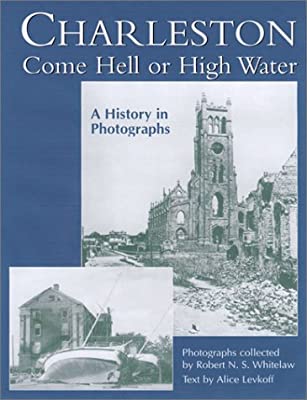 A History in Photographs

The classic pictorial record of Charleston's beauty and resiliency

Charleston Come Hell or High Water captures the indomitable spirit of one of America's oldest and best-preserved cities. Praised by Charlestonians since its initial publication, and now in its sixth printing, this gripping collection of 168 black and white photographs depicts Charleston from the advent of photography in the 1840s through the late twentienth century.

Updated with photographs of Hurricane Hugo's destruction, Charleston Come Hell or High Water offers a pictorial saga as engaging and multi-faceted as the city itself. Southern belles in the camellia gardens of Magnolia-on-the-Ashley, Citadel cadets in drill, African-Americans, and the 1901 South Carolina Interstate and West Indian Exposition share pages with images of devastation wrought by war, hurricanes, fire, tornadoes, and an earthquake. The photos include Civil War views, many from the glass plates of Mathew Brady, and images taken by both local enthusiasts and professional photographers. The collection highlights Charleston's trove of architectural gems—some lost but many preserved for the future.

Robert N. S. Whitelaw, a lifelong champion the city, collected most of the photographs for the volume but died before completing his task. Alice Levkoff assembled the book and wrote its text.


When Alice Levkoff, a graduate of the University of Michigan, moved to her husband's hometown of Charleston, her latent interest in architectural history blossomed. Her years of work with the Historic Charleston Foundation and other preservation organizations, coupled with her research at the Charleston Library Society and South Carolina Historical Society, provided the background for assembling this collection of period photographs. Levkoff lives in Charleston.

Robert N. S. Whitelaw (1905–1974) was a founding trustee of the Historic Charleston Foundation and the first full time director of the Gibbes Memorial Art Gallery. In that position, he also assumed custody of the Dock Street Theatre after its reconstruction in 1937.

"As complete a study of Charleston since the mid-nineteenth century as has yet been compiled in a single volume."—Charleston, South Carolina, Post and Courier