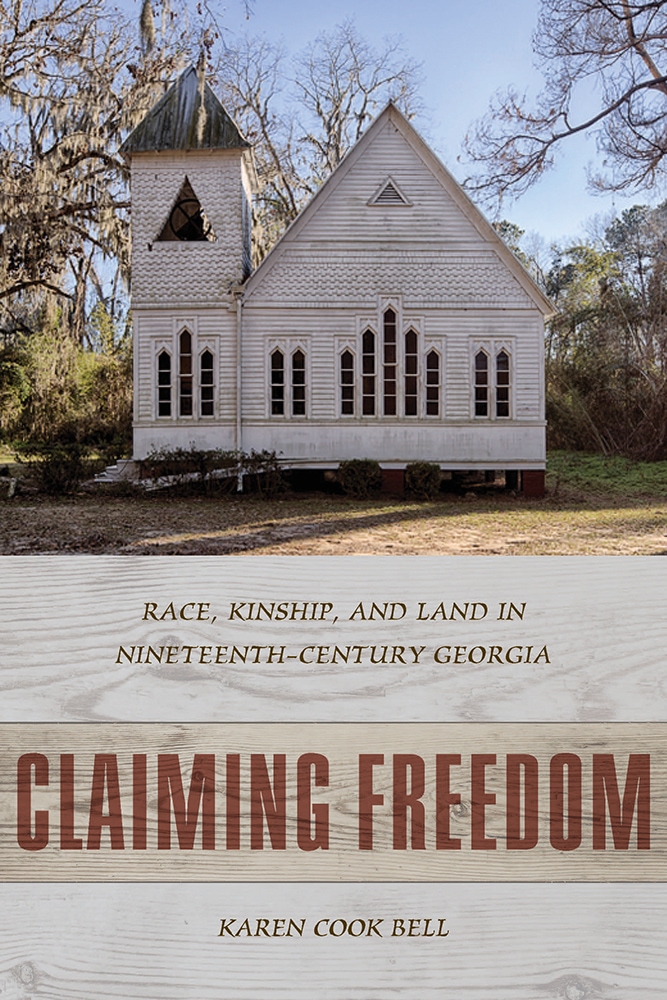 Claiming Freedom is a noteworthy and dynamic analysis of the transition African Americans experienced as they emerged from Civil War slavery, struggled through emancipation, and then forged on to become landowners during the Reconstruction and post-Reconstruction period in the Georgia lowcountry. Karen Cook Bell's work is a bold study of the political and social strife of these individuals as they strived for and claimed freedom during the nineteenth century.

Bell begins by examining the meaning of freedom through the delineation of acts of self-emancipation prior to the Civil War. Consistent with the autonomy that they experienced as slaves, the emancipated African Americans from the rice region understood citizenship and rights in economic terms and sought them not simply as individuals for the sake of individualism, but as a community for the sake of a shared destiny. Bell also examines the role of women and gender issues, topics she believes are understudied but essential to understanding all facets of the emancipation experience. It is well established that women were intricately involved in rice production, a culture steeped in African traditions, but the influence that culture had on their autonomy within the community has yet to be determined.

A former archivist at the National Archives and Records Administration, Bell has wielded her expertise in correlating federal, state, and local records to expand the story of the all-black town of 1898 Burroughs, Georgia, into one that holds true for all the American South. By humanizing the African American experience, Bell demonstrates how men and women leveraged their community networks with resources that enabled them to purchase land and establish a social, political, and economic foundation in the rural and urban post-war era.


Karen Cook Bell is an associate professor of history at Bowie State University. She received a Ph.D. in history from Howard University. Her scholarship has appeared in the Journal of African American History, Georgia Historical Quarterly, Passport, The United States and West Africa: Interaction and Relations, Before Obama: A Reappraisal of Black Reconstruction Era Politicians, Converging Identities: Blackness in the Contemporary Diaspora, and Slavery and Freedom in Savannah. Bell is a former American Association of University Women Dissertation Fellow.

"Karen Cook Bell's beautifully written book is original and stimulating. A welcome addition to the growing literature on African American rural slavery, land ownership, and rice production. The study is a valuable and timely contribution to the expanding scholarship on the multifaceted West African roots of African Americans. The book is an example of insightful and rigorous investigative scholarship."—Alusine Jalloh, associate professor of history, founding director of the Africa Program, University of Texas at Arlington

"This succinct study is an important addition to our understanding of lowcountry Georgia, where rice was king during the antebellum period and continued to influence the lives of postwar African Americans. Bell's insightful analysis of the importance of 'oppositional communities' in securing autonomy is a welcome new chapter in the freedom narrative."—Edna Greene Medford, Howard University

"A thorough examination of rich archival records and a thoughtful writing style make Claiming Freedom an important book. With a focus on nineteenth-century rice plantations of lowcountry Georgia, Karen Cook Bell examines enslaved African Americans who resisted oppression to realize freedom and justice. The book explores the risks and rewards of freedmen and freedwomen who sought self-reliance by using material, cultural, and ideological tools to forge their future."—Janice L. Sumler-Edmond, author of The Secret Trust of Aspasia Cruvellier Mirault: The Life and Trials of a Free Woman of Color in Antebellum Georgia

2018 Georgia Board of Regents Excellence in Research Award