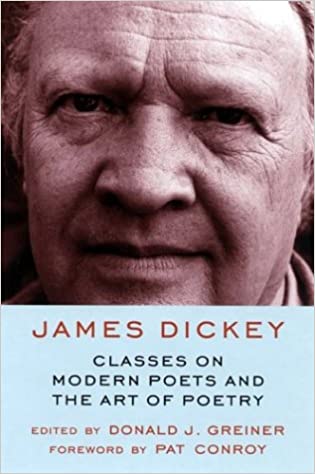 Classes on Modern Poets and the Art of Poetry

Widely known as the winner of the 1966 National Book Award and author of the best-selling novel Deliverance, James Dickey devoted himself as much to the critique of the modern literary tradition as to his participation in it. A writer enthralled by teaching, he lectured at several major universities before settling at the University of South Carolina for nearly three decades as poet-in-residence. After his death in 1997, a transcription of his lectures was found among his papers. Collected here and published for the first time, these lectures reveal judgments and appraisals Dickey would use to great effect in his teaching. They also contribute to the unraveling of Dickey's art from the larger-than-life myth that surrounded him.

In a comprehensive introduction to Dickey's remarks, Donald J. Greiner evaluates the relevance of the writer's often sharply worded opinions. The volume brings to life class sessions planned and delivered soon after Dickey took up full-time residence at the University of South Carolina, in the triumphal years following his rapid succession of honors. Full of asides, witticisms, and afterthoughts, the sessions suggest not the pontification of a scholar at an academic conference but the confident learning of a practicing poet who happens to enjoy being in the classroom. Clearly setting forth his sense of literary criticism, Dickey repeatedly emphasizes the preeminence of the poet over the critic, the original use of language as a primary criterion for effective poetry, and the centrality of personal reaction to poetry as a measure of its value. Dickey's comments are valuable for their insight into both his own thought processes and those of the poets he reviewed, among them William Butler Yeats, Ezra Pound, Dylan Thomas, A. E. Housman, Gerard Manley Hopkins, Robert Frost, Walter de la Mare, and Robert Bridges.

"James Dickey's lectures are golden reminders of a major American poet at the peak of his early poetic and critical powers. Dickey's compelling role as teacher adds a new dimension to the man and the poet. These lectures include us in his imagination, his assimilation of good and bad poetry. His imaginative focus on minor poets (e.g., Michael Hamburger) and on major poets (e.g., Dylan Thomas and W. H. Auden) of the contemporary period allows readers a virtual seat in Dickey's seminar. Packed with energy, the lectures in Classes on Modern Poets and the Art of Poetry bring life to the 'contemporary poets' circle and are a must-read to know the man and his work. I am left with an awed awareness of the poet as teacher."—Joyce Pair, founding editor of James Dickey Newsletter

"Classes on Modern Poets and the Art of Poetry offers unique insights into the mind of a literary genius. James Dickey's thoughts on other writers are lively and compelling. Most important, they reveal a great deal about Dickey's own craft. The reader witnesses the extraordinary range of Dickey's reading and his knowledge of poetic techniques. Donald J. Greiner has done a wonderful job editing the volume. The book is an invaluable addition to Dickey scholarship."—Ernest Suarez, The Catholic University of America