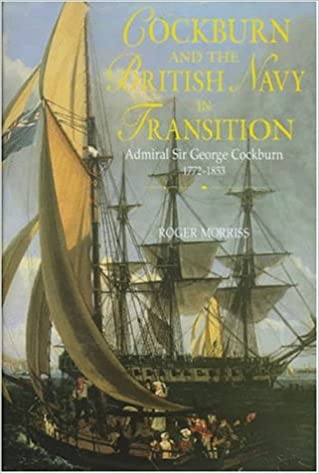 Cockburn and the British Navy in Transition

How one British admiral changed the course of naval history

Cockburn and the British Navy in Transition documents the long and varied career of Admiral Sir George Cockburn, who presided over much of the British Navy's transition from sail to steam while maintaining the interests and professionalism of the officer corps.

Cockburn's life and times encompassed service under Admiral Horatio Nelson during the French Revolutionary War; diplomacy and combined operations during the Napoleonic Wars and the War of 1812 with the United States; and administrative, political, and technological changes during the first half of the nineteenth century.

Cockburn emerged from the Napoleonic Wars as the best-known British admiral, renowned for his part in the attack on Washington in 1814 and for escorting Napoleon to St. Helena. But his greatest impact was from 1818 to 1846 at the Admiralty Office, where he steered the British Navy through some of the most disruptive political and technological changes it has ever faced.

Cockburn's attitude towards the development of more seaworthy sailing warships and his key role in the introduction of the screw propeller are also examined—inovations that coincided with the decline of flogging, impressment, and personal patronage in the management of the British Navy.

Though Cockburn was often regarded as a reactionary, Roger Morriss reveals the liberalism that enlightened his policies in the Navy. By providing unique insight into a highly influential figure and into the many facets of admiralty administration, this book makes a valuable contribution to naval history.


Roger Morriss was a curator at the National Maritime Museum in London until 1995. He is an honorary research fellow at the University of Exeter Centre for Maritime Studies and in the history department of University College London.

"In this fine study, Morriss's key contribution is to show that, more than any other naval officer, Cockburn's was the steady, guiding hand for the Royal Navy in that difficult and demanding peacetime era between the Napoleonic and the Crimean Wars."—Journal of Military History

"Dr. Morriss has successfully demolished the Whig myth of Cockburn the reactionary and his valuable study allows us to appreciate Cockburn's achievements as perhaps the dominant figure in the British navy between 1815 and 1850."—International Journal of Maritime History

"Not the least interest of this fascinating book is that Morriss conveys the drama of a period of great change, popularly dismissed as an anticlimatic coda to the 'Nelson years.' Firmly rooted in archival research, compellingly and lucidly written, this book deserves to become a classic study."—English Historical Review