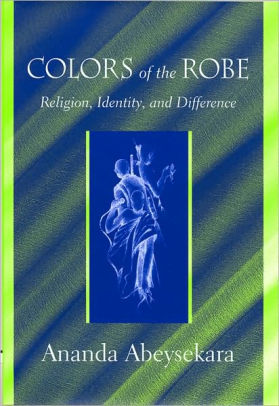 Colors of the Robe

A compelling case study of Buddhism in contemporary Sri Lanka

Colors of the Robe probes the Sri Lankan world of Buddhism and politics and suggests innovative directions for the global study of religion, culture, and violence. In a volume that surpasses other studies in locating Sri Lankan Buddhism in its sectarian, ethnic, cultural, social, and political constructions, Ananda Abeysekara illuminates the shifting configurations that animate the relations connected with postcolonial religious identity and culture.

Drawing on extensive field research in Sri Lanka, Abeysekara illustrates how differing discourses about Buddhism come into central view and then fade. He develops the concept of "minute conjunctures of contingency" and places it in modest opposition to the Foucauldian (and postcolonial) conceptions of history and identity. Abeysekara suggests that the conjunctures of contingency help realize that Buddhism, identity, and difference do not remain simply available for disciplinary apprehension. This way of thinking about the unavailability of Buddhism, he contends, has profound political implications for how we might more generally think about and begin to disrupt entrenched presumptions of postcolonial cultural difference.


Ananda Abeysekara is an associate professor of religious studies at the Center for Interdisciplinary Studies at Virginia Polytechnic Institute and State University. He is the author of The Politics of Postsecular Religion: Mourning Secular Futures.

"Colors of the Robe is a subtle and critical inquiry into the agonistic space of discourse about Buddhism and politics in Sri Lanka. A fascinating work of multiregistered sophistication, it challenges the ready-to-hand assumptions that guide much of the contemporary study of religion, culture, and violence in the postcolonial world"—David Scott, Columbia University

"This book is a rewarding study of the manifold ways in which monastic identities, as well as Buddhism and Buddhist identities, have unfolded in late twentieth-century Sri Lanka."—Journal of Religion

"This work will be a catalyst for further analysis and debate for some time to come."—Choice

Winner of the 2003 Award for Best First Book in the History of Religion, American Academy of Religion