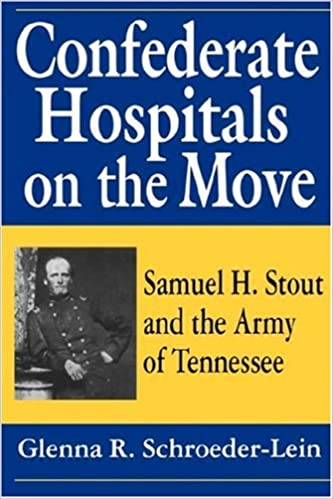 Confederate Hospitals on the Move

Samuel H. Stout and the Army of Tennessee

Confederate Hospitals on the Move tells the story of one innovative Confederate doctor and his successful administration of the mobile military hospitals that served behind the Army of Tennessee's transient battle lines. In 1864, at the peak of his career, Samuel Hollingsworth Stout managed more than sixty medical facilities scattered from Montgomery, Alabama to Augusta, Georgia. Glenn R. Schroeder-Lein reveals how this doctor-turned-talented-administrator established and oversaw some of the most adaptable, efficient, and well-administered hospitals in the Confederacy.

Through Stout's eyes Schroeder-Lein describes the selection of hospital sites, the care and feeding of patients, the provisioning of the hospitals, and the personnel who cared for the sick and wounded. She also discusses the movement of the hospitals and how the facilities were affected by overcrowding, supply shortages, and the scarcity of transportation.

Using the 1,500 pounds of hospital records that Stout saved during his tenure as medical director of the Army of Tennessee, Schroeder-Lein demonstrates that Stout was a rarity both in his competence as an administrator and in his penchant for saving wartime documents. She traces Stout's prewar years, his ascension to directorship of the hospitals, his success in administering the facilities, and his failure to find a niche for his talents in a civilian setting after the war's end.

The first study of a Confederate army hospital system from the vantage point of a medical director, Confederate Hospitals on the Move offers new information on the difficulties facing Confederate hospitals on the Western front as opposed to the more stable, protected hospitals in the East. In addition, the book supplements previous research on the care of the wounded and on medical practices during the Civil War period.

"Thoroughly researched, impressively documented, forcefully argued, and convincingly written. Schroeder-Lein is to be commended for rescuing Stout from relative anonymity and for shedding important light on Confederate medicine in the less well known western theater."—Journal of American History

"This well-researched and ably-written study addresses an important but largely neglected subject. Even serious students of the Civil War should find bountiful new material that will help to illuminate the full story of medical care in the Confederate military as well as the history of the army that protected the vast midsection of the Confederacy between the Appalachian Mountains and the Mississippi River."—Gary W. Gallagher, editor of Fighting for the Confederacy: The Personal Recollections of General Edward Porter Alexander

"Glenna Schroeder-Lein is a super-sleuth and Confederate Hospitals on the Move is superior scholarship. Stout's story is a fascinating blend of human drama, medical melodrama, and social saga. . . . An important book and a tour de force in research."—Emory M. Thomas, author of The Confederacy as a Revolutionary Experience