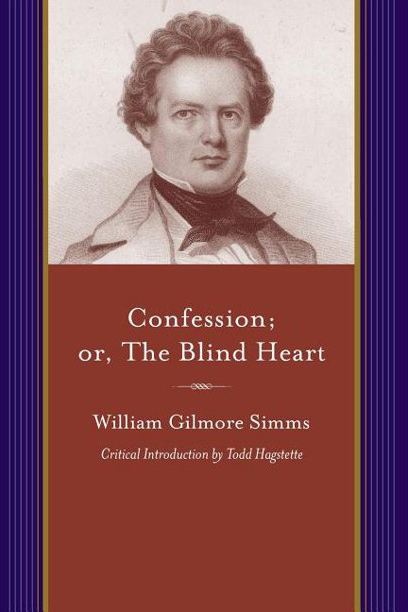 Confession; or, The Blind Heart

Building out of his early experiences with writing in the psychological gothic mode in such texts as Martin Faber (1833) and Carl Werner (1838) and anticipating his later work Castle Dismal (1844), William Gilmore Simms published Confession; or, The Blind Heart in 1841. This novel is the extended confession of Edward Clifford who is orphaned at a young age and sent to be reared by his aunt and uncle in Charleston. Rising above his foster parents' scorn, Clifford becomes a lawyer, a prominent citizen, and a husband to his cousin, Julia. His turbulent childhood leaves him emotionally scarred and suspicious of human relationships, though, and thus he becomes increasingly jealous of his wife's friendship with his boyhood companion, William Edgerton. After failing to ease his paranoia by moving his family west to Alabama, Clifford poisons his wife and challenges Edgerton to a duel. Edgerton, however, commits suicide first. Thanks to posthumous letters from both Julia and Edgerton, Clifford realizes his mistaken assumptions and, at the end of the novel, wanders further west into untamed Texas in search of absolution. Confession; or, The Blind Heart marks an early, well-written study of domestic battery in American literature. Confession occupies an interesting space in the overlap between Simms's Border Romances and gothic narratives because of its elements of westward progression as well as psychological examinations.