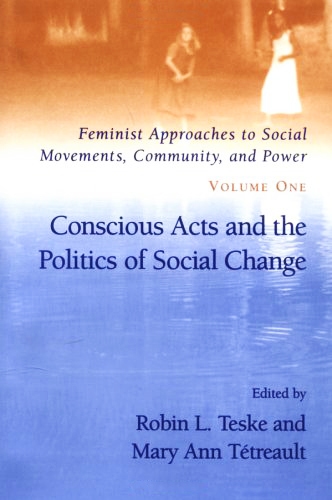 Conscious Acts and the Politics of Social Change

Conscious Acts and the Politics of Social Change counters the notion, widely propagated by antifeminist forces, that feminists represent a group of socially deviant outsiders. In fifteen essays that explore feminist projects to advance human freedom, social activists and academic analysts find feminists to be typical members of their society who promote social movements for nonviolent change in law-abiding ways. Foiling the picture of aberrance, they portray feminists as grandmothers demonstrating quietly in city squares, mothers distributing "subversive" literature from their babies' strollers, and pious women taking issue with politicians who use religion to justify repressive legislation. The contributors also contend that feminism has been a strong force for building civil society and fighting oppression in political and social systems throughout the world.

The essays offer a range of reports on feminist theory and activism, some of which celebrate success stories, including the struggle of American women who fight for suffrage, of Czechoslovaks who resist Communist censorship, of Chilean women who want to end the oppressive Pinochet regime by demanding an accounting of their "disappeared" children. Other essays relate failures—the use of an organization intended to provide assistance to Russian families to gain publicity for its American director and to embezzle funds for her local assistants, the clash among women's groups in Iowa that contributed to the defeat of a state equal rights amendment. The remaining essays consider the persistence of socially ambiguous behavior such as lying, violence, cruelty, and discrimination. Collectively the case studies provide opportunities to investigate the characteristics and strategies that have affected positive social change—and those that have not—with an eye toward understanding how persons who want to initiate constructive social change might do so with the resources at their disposal.


Robin L. Teske, an associate professor of political science at James Madison University in Harrisonburg, Virginia, has worked as an attorney with the Washington, D.C.based International Human Rights Law Group and as a Peace Corps volunteer in the Republic of Korea.

Mary Ann Tétreault is a professor of political science at Iowa State University in Ames. The author of four books, most recently The Kuwait Petroleum Corporation and the Economics of the New World Order, Tétreault is the editor of Women and Revolution in Africa, Asia, and the New World.