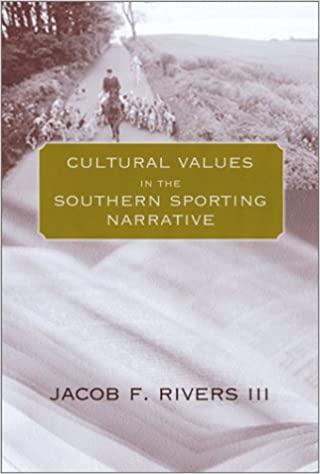 Jacob F. Rivers's Cultural Values in the Southern Sporting Narrative examines classic southern fiction—along with lesser-known literary works—with an eye to the ways that southern writers such as William Elliott, William Gilmore Simms, and William Faulkner depict hunting and outdoorsmanship. Blending literary history with sociology and cultural criticism, Rivers explores the recurring themes of honor, fair play, and noblesse oblige and illustrates how the sporting genre has reflected the moral consciousness of the American South.

Relationships between human beings and animals, as well as the connections between landowners and the soil they claimed as private, have been a key element of southern literature for 150 years. Hunting has provided rich symbolic and philosophical material for writers who celebrate its rituals, its etiquette, and its ability to unite humanity and nature. Rivers examines the role of these moral values and traditions in the literature over time, highlighting early works such as Elliott's Carolina Sports by Land and Water and Simms's The Cub of the Panther, both of which delve into the relationship of man as an extension of nature. He notes the continuity of values in later hunting fiction as well, and maintains that while the twentieth century authors engage similar themes, many of the old traditions are lost to modern society. Faulkner and other modern writers that Rivers includes both share the traditions and chronicle the traditions' demise.

Looking at the writings of Elliott, Simms, and Faulkner, along with those of Archibald Rutledge, Caroline Gordon, James Kilgo, and others, Rivers also addresses the themes of the Southern sporting ethos as an integral part of proper aristocratic conduct. He also looks at the southerner's characteristic attachment to family, land, and the inherited moral imperatives of this society, as well as the code of honorable sportsmanship.


Jacob F. Rivers III spent much of his youth hunting and fishing in the South Carolina lowcountry. He received a Ph.D. in American literature from the University of South Carolina in Columbia, where he now serves as director of the Office of Veteran Services. Rivers lives in Columbia.

"Hunting was—and is—an intergral part of the lives of many Southerners. The chronicles of their adventures form an interesting sub-genre of Southern fiction. In this cogent study, Jacob Rivers examines nearly two centuries of Southern writers and the powerful inter-relationship between Southerners and the land they loved."—Walter Edgar

"Sport has always run as a bright thread through the fabric of Southern culture, yet students of the region and its literature have paid scant attention to the manner in which hunting and fishing mirror the region and its cultural values. With the publication of Jacob Rivers's insightful book, we have taken a significant step toward rectifying this oversight."—Jim Casada