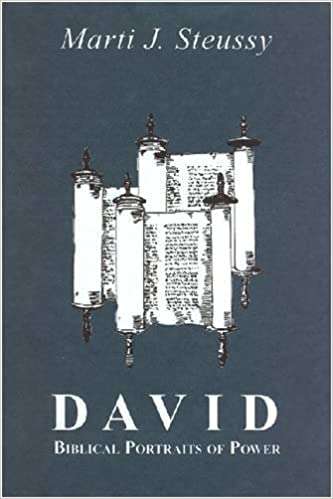 Marti J. Steussy provides a critical approach to the man who receives more attention from the Old Testament's writers than any other human character. This volume explores the Hebrew Bible's three major portraits of David—found in 1 and 2 Samuel, 1 Chronicles, and Psalms—and what each implies about the relation between divine and worldly power.

Steussy's examination of David in 1 and 2 Samuel opens with the traditional impression of David as a virtuous hero "after God's own heart," then invites readers to consider details of plot and phrasing that make problematic—without erasing—the impression of innocence. She proposes that questions surrounding David ultimately probe God's role in Israel's history. The scrutiny of David in 1 Chronicles shows how this book calls attention to his role as the head of a people rather than to his individual strengths and weaknesses. However, tension still lurks; David plays a key role in Chronicles' argument against Ezra and Nehemiah for an inclusive Israel.

Steussy's final character analysis begins with psalms about David, then discusses the ruler as the commonly accepted speaker of the David psalms. Steussy suggests that in the Psalter as a whole, David serves both as a model for individual spiritual development and as a symbol for Israel throughout its history. The complexity of David's role in Psalms, Steussy contends, models the complexity of his characterization in the Hebrew Bible as a whole. A concluding chapter calls attention to David's scattered appearances in other parts of the Hebrew canon and discusses the cumulative effect of his various portraits.


Marti J. Steussy, MacAllister-Petticrew Professor of Biblical Interpretation at the Christian Theological Seminary in Indianapolis, is an ordained minister of the Christian Church (Disciples of Christ). Her books include Psalms and Gardens in Babylon: Narrative and Faith in the Greek Legends of Daniel.

"This study is a model of just the sort of work that formal biblical studies should produce and value."—Religious Studies Review

"Employing an essential literary-critical approach, Steussy offers an insightful and intriguing exploration of one of the Hebrew Bible's central human characters. Highly recommended for all academic levels and for practitioners."—Choice

"Steussy writes with charm and clarity. By using analogies to art, from stained-glass windows to Picasso murals, she makes the interrelationships among the biblical books with their diverse preoccupations and styles easy to grasp. This is a splendid contribution to biblical studies, accessible on many levels."—Theological Studies

"This study is a model of just the sort of work that formal biblical studies should produce and value."—Religious Studies Review