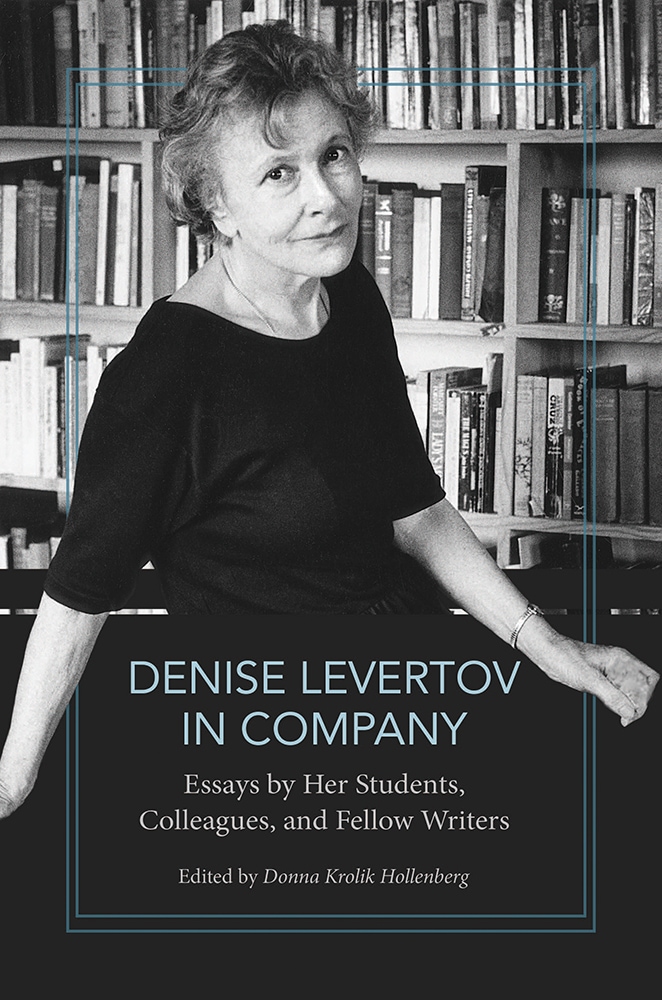 Essays by Her Students, Colleagues, and Fellow Writers

Denise Levertov (1923-1997) was an award-winning author of more than thirty books of poetry and prose featuring the subjects of politics and war and, in later years, religion. Born and raised in England amid political unrest and war, Levertov moved to the United States after World War II and settled in as a passionate poet/activist for peace and environmental conservation. She initially gained recognition as a member of the Black Mountain poets and later as a highly respected mentor and educator at esteemed universities including Massachusetts Institute of Technology, Brandeis, and Stanford, where she helped shape future generations of poets. In Denise Levertov in Company, Donna Krolik Hollenberg has assembled ten essays by contemporary poets who were influenced by Levertov as former students and/or colleagues and another ten by literary critics.

Hollenberg selected contributors on the basis of their spiritual, intellectual, and political connections with Levertov at different stages of her life in the United States, and all are distinguished in their own right. The first five poets became acquainted with Levertov in the 1960s and 1970s, when she and they protested against the war in Vietnam. The next five poets, who were close to Levertov in the 1980s and 1990s while she was at Stanford, respond to aspects of Levertov's religious quest and her love and concern for the natural world.

To assess Levertov's influence on contemporary poetry, Hollenberg has organized the essays into pairs. First a contributor offers a personal essay about his or her relationship with Levertov, which is followed by a companion essay about the contributor's poetry in relation to Levertov's. What emerges is a dialogue between autobiographical testimony and critical analysis. This combination of personal witness and objective evaluation
contributes to a greater understanding of the contemporary poetry scene and the influence of Levertov's distinguished and affecting legacy.


Donna Krolik Hollenberg, professor emerita of English at the University of Connecticut, is the author or editor of four books and many essays about twentieth-century poetry. Her most recent book is A Poet's Revolution: The Life of Denise Levertov.

"The sweep and variety of these essays will give this collection longevity not common in such efforts. As Eavan Boland says, Levertov was a defining poet . . . whose stature grows as the years pass. These essays will keep alive her memory and spur renewed appreciation of her life and work in a new generation of readers and scholars."—Ed Block, Emeritus Professor of English, Marquette University

"Denise Levertov in Company is a remarkable and unique collection of essays. We see Levertov's life and work through very intelligent compassionate eyes, . . . This is prose doing much of the work of poetry."—Charles F. Altieri, University of California, Berkeley

"Donna Hollenberg has followed her excellent biography of Levertov with this fascinating collection of essays placing Levertov at the center of a creative dialogue with fellow poets and writers, about the sources and ends and craft of poetry. Taken together, these essays offer not just an examination of poetic influence but a multi-faceted inquiry into the creative process."—Albert Gelpi, Stanford University

"What Hollenberg has done with this collection of essays is to organize them meaningfully. For instance, Paul Lacey writes about both Levertov and her former student Mark Pawlak (who is now a published poet), and Lacey's essay ties that part of the book together. A very useful collection."—Linda Wagner-Martin, Frank Borden Hanes Professor of English emerita, University of North Carolina at Chapel Hill

"A fascinating portrait of Levertov as strong-willed teacher and mentor through the intensely personal lens of younger poets who share—and resist—her commitments and craft. Critical essays provide a context in which the poets' tributes resonate to develop the continuing significance of Levertov's most controversial poetry—political and religious."—Anne Dewey, Saint Louis University-Madrid