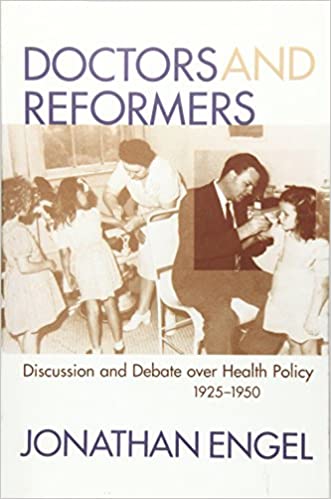 Jonathan Engel traces the policy debates over healthcare delivery, and the ways of paying for it, that were conducted during the second quarter of the twentieth century in the United States. Examining the views advanced by doctors, including those unallied with the American Medical Association's position, as well as by "reformers"—academics, public health officers, philanthropists, foundation executives, and independent scholars—Engel displays how the discussion involved much more than the legislative efforts of New Deal Democrats regarding health insurance.

Under discussion were group care, industrial health plans, nationalized hospitals, and public dispensaries. Engel's attention to the letters and other writings of some of the key participants in the debates enriches his account, with the papers of Morris Fishbein, the president of the AMA, Michael Davis, a researcher for the Julius Rosenwald Foundation, and I. S. Falk, the research director for the Social Security Administration, adding concrete detail. His investigation demonstrates that physicians' reactions to legislative remedies were not monolithic. It also shows that foundation leaders were instrumental in enlisting organized labor, farmers, and liberal legislators in the improvement of the "world's best" medical care, and that the discussion was much broader than a debate between political foes.

Engel draws a vivid picture of the differences between Franklin Roosevelt's and Harry Truman's degree of commitment to advancements in the policy area. Participants in the debates discovered no simple solution to the challenges they explored, however, and their positions above all foreshadow the debate of succeeding decades.


Jonathan Engel is an associate professor of health policy and management at Seton Hall University in South Orange, New Jersey, where he teaches courses in the history and philosophy of medicine as well. He has held appointments in Washington with the Health Care Financing Administration and the White House Advisory Committee on Human Radiation Experiments. Engel lives in Millburn, New Jersey.