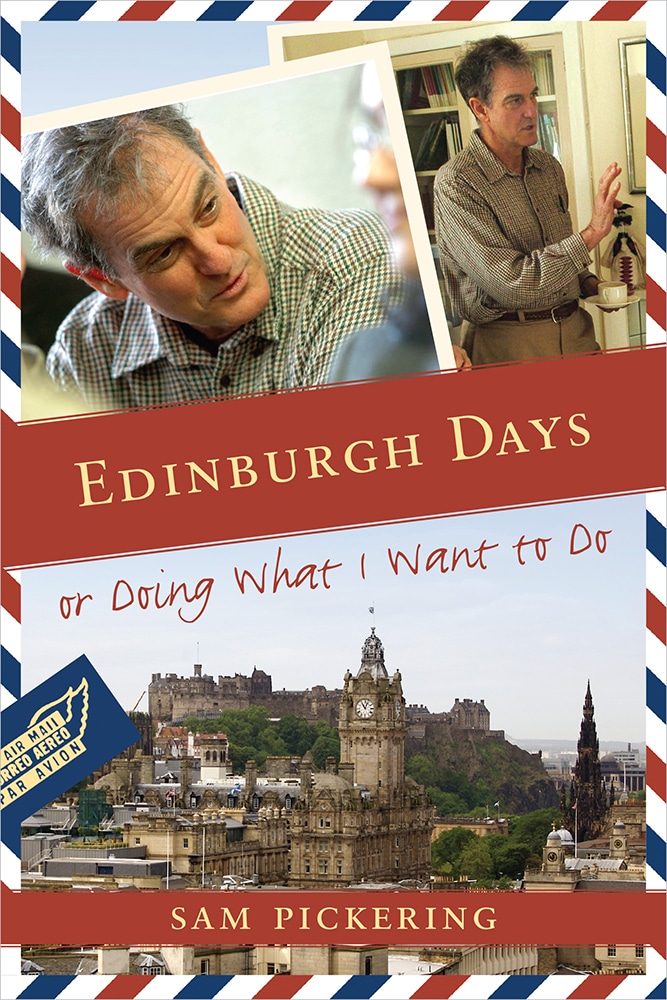 Edinburgh Days, or Doing What I Want to Do

Part travelogue, part psychological self-study, Sam Pickering's Edinburgh Days, or Doing What I Want to Do is an open invitation to be led on a walking tour of Scotland's capital as well as through the labyrinth of the guide's swerving moods and memories. Along the way readers discern as much from Pickering's sensual observations of Scottish lives and landmarks as they do about what befalls the curious mind of an intellectual removed from the relations and responsibilities that otherwise delineate his days.

Pickering spent the winter and spring of 2004 on a fellowship at the Institute for Advanced Studies in the Humanities at the University of Edinburgh, making his return to the city after a forty-year absence. Edinburgh Days maps the transition from his life in Connecticut, defined by family, academic appointments, and the recognition of neighbors and avid acolytes, to a temporary existence on foreign soil that is at once unsettlingly isolating and curiously liberating.

Torn between labeling himself a tourist or a sojourner, Pickering opts to define himself as an "urban spelunker" and embarks on daily explorations of the city's museums, bookshops, pubs, antique stores, monuments, neighborhoods, and graveyards. His ambling tours include such recognizable sites as Edinburgh Castle, the Palace of Holyroodhouse, Castle Rock, the Museum of Childhood, the National Gallery, the Writers' Museum, the Museum of the People, the Huntly House, the John Knox House, the Royal Botanic Garden, and the Edinburgh Zoo.

The holdings of city and university libraries present Pickering with the opportunity to revisit the works of a host of writers, both renowned and obscure, including Robert Louis Stevenson, Samuel Smiles, John Buchan, Tobias Wolfe, Russell Hoban, Patrick White, Hilaire Belloc, and Van Wyck Brooks.

"I have long been a traveler in little things," he muses, and it is his fascination with minutiae that infuses this collection of essays with the dynamic descriptions, quirky observations, and jesting interludes that bring the historic city to life on the page and simultaneously recall the very best of Pickering's idiosyncratic style.


The inspiration for Robin Williams's character in the film Dead Poets Society, Sam Pickering is a professor of English at the University of Connecticut in Storrs. His nineteen previous books include Waltzing the Magpies: A Year in Australia, Letters to a Teacher, and Indian Summer: Musings on the Gift of Life.

"In Edinburgh Days, we meet Sam Pickering in the prime of his intellectual curiosity and writerly acumen. As he travels the damp, cobalt-gray streets of the great northern city, we rummage with him in old shops, follow him through gardens and graveyards, and see oft-visited monuments and museums through his fresh eyes. Pickering's deep familial sense permeates the pages, reminding us how connections to home and family can keep us tethered even when abroad. Equal parts self-reflection and world-inspection, these briskly paced essays move artfully in a prose that glistens with natural details and an unapologetic delight in the foibles of humankind at its most genuine. We are fortunate to have Pickering as our tour guide on these meanderings of feet and mind."—Jay Parini, D. E. Axinn Professor of English and Creative Writing, Middlebury College

"No one else writes the contemporary personal essay quite like Pickering. His prose recalls the best and brightest masters of the genre, but with an original voice and style completely his own. This represents his finest work so far. Built around a loose chronology of a semester spent living and working in Edinburgh, the pieces in this collection form a cohesive whole that is by turns evocatively descriptive, poignantly moving, deeply confessional, and richly comic—as only a learned and experienced wit can be. Edinburgh Days invites reflection on the setting, the author, and ourselves. Here Pickering has given us a fine contribution to American letters and, indeed, a celebration of good reading and good writing."—George Garrett, professor emeritus of creative writing, University of Virginia