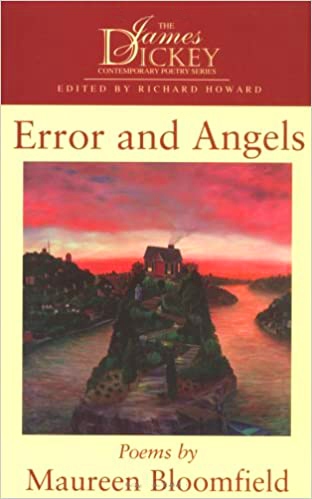 To err is to wander, and the speaker of Maureen Bloomfield's Error and Angels wakes to find that she has strayed, like Dante's traveler, from the path whose end is light. Voices from her Catholic school days, figures from the Judaeo-Christian mythos, and fragments from the history of art inform her ironic, iconic quest. Invoking Iphigenia, Sarah, Mary, Magdalen, Giuliana, and others, she questions the confluences, in women's lives, between renunciation and fertility, beauty and its abnegation—acts and attributes whose ramifications imply a provisional, deleterious kind of power.

Bloomfield writes of shifting landscapes—London, Paris, the American Midwest, Florida, Florence. These places align the interior and exterior mirrors as she inspects the conjunction between fate and folly, misapprehension and mistake. At the heart of these poems is the mystery of language as it demonstrates the exigencies of goodwill and of grace.

Born in Cleveland, Ohio, Maureen Bloomfield grew up in St. Petersburg Beach, Florida. Her poems have appeared in the Kenyon Review, The Nation, the Paris Review, Partisan Review, Poetry, Shenandoah, and Southern Review. Her reviews of contemporary art have appeared in Artforum, Art News, Dialogue, New Art Examiner, and Sculpture. The mother of two daughters, Bloomfield lives in Cincinnati, where she works as an editor.

"Bloomfield's poems have the feverish acuity of painting seen in dreams. Spylike, she slips back and forth across the psychic borderline between portent and plain common sense."—Tom Disch