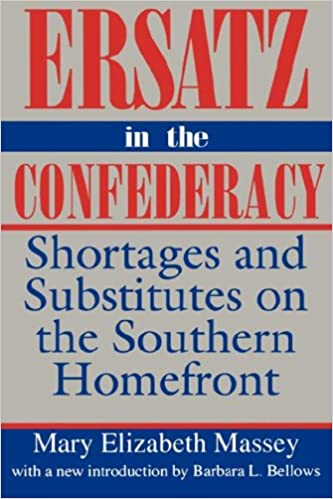 Ersatz in the Confederacy

Shortages and Substitutes on the Southern Homefront

First published by the University of South Carolina in 1952, Ersatz in the Confederacy remains the definitive study of the South's desperate struggle to overcome critical shortages of food, medicine, clothing, household goods, farming supplies, and tools during the Civil War.

Mary Elizabeth Massey's seminal work carefully documents the ingenuity of the Confederates as they coped with shortages of manufactured goods and essential commodities—including grain, coffee, sugar, and butter—that previously had been imported from the northern states or from England. Creative Southerners substituted sawdust for soap, pigs' tails and ears for Christmas tree ornaments, leaves for mattress stuffing, okra seeds for coffee beans, and gourds for cups. Women made clothing from scraps of material, blankets from carpets, shoes from leather saddles and furniture, and battle flags from wedding dresses.

Despite the Confederates' penchant for "making do" and "doing without," Massey's research reveals the devastating impact of war's shortages on the South's civilian population. Overly optimistic that they could easily transform a rural economy into a self-sufficient manufacturing power, Southerners suffered from both disappointment and hardship as it became clear that their expectations were unrealistic. Ersatz in the Confederacy's lasting significance lies in Masseys clearly documented conclusion that despite the resourcefulness of the Southern people, the Confederate cause was lost not at Gettysburg nor in any other military engagement but much earlier and more decisively in the homefront battle against scarcity and deprivation.