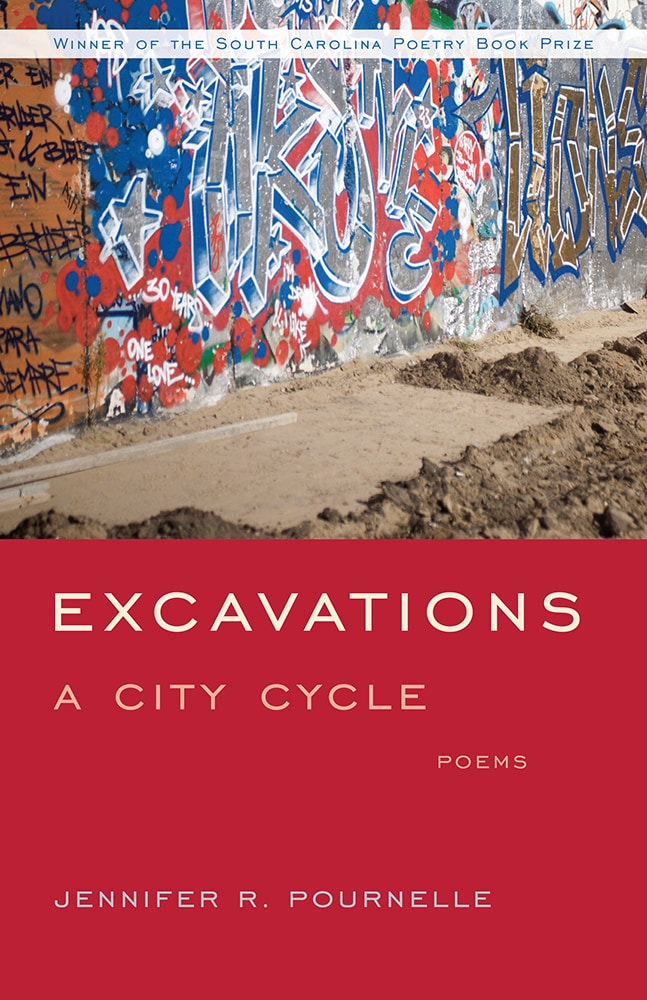 Selected by Rigoberto Gonzales as the winner of the South Carolina Poetry Book Prize, Excavations: A City Cycle is the first collection of poetry from Jennifer R. Pournelle. Set in different cities over fifteen years of peace and war, the collection explores the hidden similarities of these locations' seemingly different landscapes and cultures. She begins in Vienna with the destruction of Saint Michael's Square, then to a reunified Berlin, and from there to the Spanish influenced San Diego, ending in the midst of the religious conflicts of Baghdad. Through vivid explorations of place, Pournelle's narratives bring to the surface defining historical events from these sites and their host cultures as the poems reveal how events rooted in these locations ripple outward to affect the world beyond. A career soldier turned environmental anthropologist and archeologist, Pournelle is deeply attuned to visions of loss and destruction as well as the promise of rebirth and rediscovery. Her poems voice her individual experiences abroad as she sifts—literally and metaphorically—through layers of turbulent history and harsh present circumstances in search of some small promise of future recovery for all that has been lost.

Jennifer R. Pournelle has lived in ten states and eight countries. She received her doctorate in anthropology and archaeology from the University of California–San Diego. After leaving the U.S. Army, she spent time as a professional editor before embarking on her current career as an environmental anthropologist and archaeologist. Her poems have appeared in Parnassus Literary Journal and Minerva. She lives with her partner in Columbia, South Carolina, where Pournelle is a research assistant professor with the University of South Carolina School of the Environment.

"Balancing the controlled tension that binds each poem, the living amongst the dead, the city standing and the city 'amid the dust of balconies cascading down on the heads of passers-by,' this poet's voice is like the song of high priestess, a truthfulness that fills the room. Jennifer Pournelle's poems form a body of work that has at its core the beating of an enormous heart, a beautiful heart."—Charlene Spearen, author of A Book of Exquisite Disasters and associate director of the South Carolina Poetry Initiative

"The excavations that take place in this book are literal and metaphorical. As the speaker moves through Europe, the Middle East, and the American Southwest, she's undertaking a serious study of the brick and mortar composition of cities such as Vienna, Berlin, San Diego, and Baghdad. But each city is, as the speaker notes, 'a city within a city,' that is, a story within a story, the layers of which come to light as the speaker soaks up each environment—its textures, its temperatures, its temperaments—its past offenses, its present troubles, and its future possibilities."—Rigoberto Gonzalez, author of Butterfly Boy: Memories of a Chicano Mariposa, from the foreword