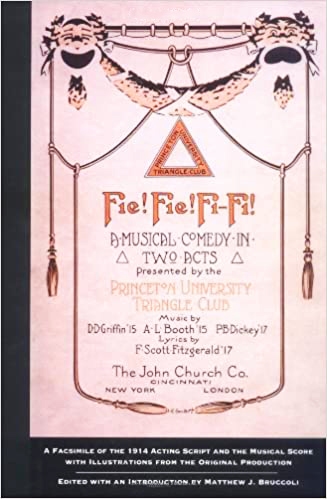 A Facsimile of the 1914 Acting Script and the Musical Score, with Illustrations from the Original Production

A documentation of Fitzgerald's apprenticeship

In 1914, while he was a freshman at Princeton University, F. Scott Fitzgerald wrote the book and lyrics for the Princeton Triangle Club musical Fie! Fie! Fi-Fi!. As his first publications, the acting script and libretto are now collector's items prized both for their rarity and for their documentation of Fitzgerald's early literary committment. This facsimile, published as part of the Fitzgerald Centenary Celebration, makes available the text from one of two surviving printed acting scripts. The volume also features photographs from the original production, together with the original song book.

In his introduction, Matthew J. Bruccoli reconstructs the writing and production of the play. He describes the annual campuswide competition that prompted Fitzgerald to compose the musical, and he comments on the creative leap that the work represents for a youth of seventeen with no experience in musical comedy. Bruccoli explains the musical's complicated plot (which turns on the activities of Fi-Fi Gormilley,manicurist at the Hotel Della Palma in Monaco), its maze of romantic pairings, and its witty dialogue. In doing so, he demonstrates the significance of Fie! Fie! Fi-Fi! in Fitzgerald's apprenticeship.