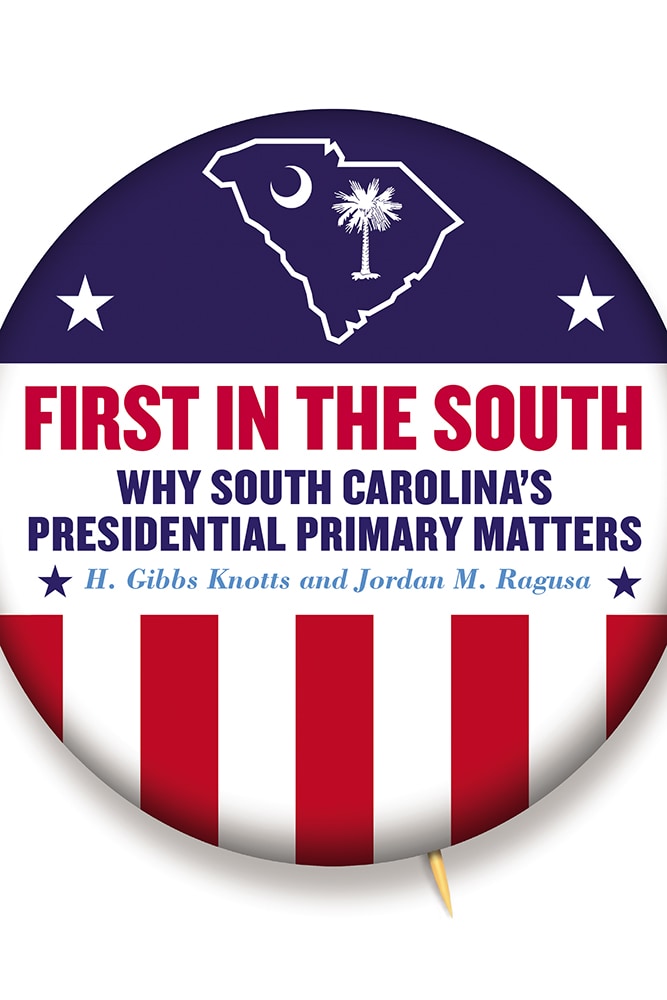 First in the South

Every four years presidential hopefuls and the national media travel the primary election circuit through Iowa and New Hampshire. Once the dust settles in these states, the nation's focus turns to South Carolina, the first primary in the delegate-rich South. Historically Iowa and New Hampshire have dominated the news because they are first, not because of their predictive ability or representativeness. In First in the South, H. Gibbs Knotts and Jordan M. Ragusa make the case for shifting the national focus to South Carolina because of its clarifying and often-predictive role in selecting presidential nominees for both the Republican and Democratic Parties.

To establish the foundation for their claim, Knotts and Ragusa begin with an introduction to the fundamentals of South Carolina's primary. They then detail how South Carolina achieved its coveted "First in the South" status and examine the increasing importance of this primary since the first contest in 1980. Throughout the book they answer key questions about the Palmetto State's process, using both qualitative information—press reports, primary sources, archival documents, and oral histories—and quantitative data—election results, census data, and exit polls.

Through their research Knotts and Ragusa argue that a key factor that makes the South Carolina primary so important is the unique demographic makeup of the state's Democratic and Republican electorates. Knotts and Ragusa also identify major factors that have bolstered candidates' campaigns and propelled them to victory in South Carolina.While the evidence confirms the conventional wisdom about endorsements, race, and being from a southern state, their analysis offers hope to political newcomers and candidates who raise less money than their competitors. Succinct and accessible, First in the South is a glimpse behind the curtain of the often-mysterious presidential primary process.


H. Gibbs Knotts is a professor and chair of the Department of Political Science at the College of Charleston and codirects the American Politics Research Team. Along with Chris Cooper, he co-authored The Resilience of Southern Identity: Why the South Still Matters in the Minds of Its People. Knotts has published articles in the Journal of Politics, Public Administration Review, Political Research Quarterly, American Politics Research, Social Forces, and Southern Cultures.

Jordan M. Ragusa is an associate professor of political science, codirects the American Politics Research Team, and is a research fellow in the Center for Public Choice and Market Process at the College of Charleston. His work has been published in Political Research Quarterly, Journal of Political Science, American Politics Research, Political Science Quarterly, Research and Politics, Perspectives on Politics, and the Journal of Elections, Public Opinion, and Parties.

"Combining rich archival research with statistical analysis, Knotts and Ragusa offer a comprehensive look at South Carolina presidential primaries. An excellent primer for political practitioners and journalists, the book provides a compelling argument for why South Carolina enjoys an early spot on the presidential primary calendars of both parties."—Danielle Vinson, Furman University

"an excellent primer on the importance of South Carolina and, by extension, the South in selecting contemporary presidents."—Political Science Quarterly