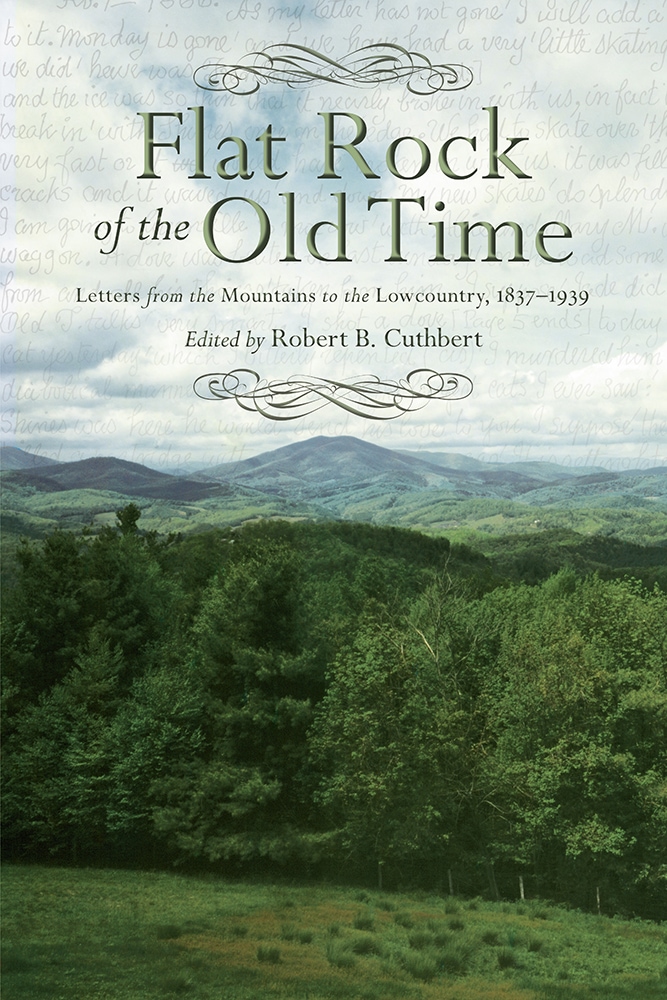 Flat Rock of the Old Time

edited by Robert B. Cuthbert

in the nineteenth century because it offered them respite from the sickly, semitropical coastal climate. In Flat Rock of the Old Time, editor Robert B. Cuthbert has mined the collections of the South Carolina Historical Society to publish a documentary history of the place and its people. While many visitors came and went, others chose to become permanent residents. Among the Flat Rock settlers were some of the most distinguished South Carolina gentry: Blakes, Rutledges, Hugers, and Middletons.

They established the Episcopal parish church of St. John in the Wilderness Church, where many of them are buried. They also supported a local economy that helped provide livelihoods to native residents who supplied them with goods and services. Visiting each other daily, they swapped news and gossip, sharing their joys and burdens. Lowcountry families refugeed to Flat Rock during the Civil War, thereby escaping the devastation of the coast but not the revolutionary consequences of the war, such as emancipation, occupation, and economic collapse. And through it all they wrote letters. Some refugee-residents sent off missives every day, describing the delicious weather, the activities of their neighbors, and the entwining relationships of family, faith, business, and recreation that sustained Flat Rock.

The century chronicled in Flat Rock of the Old Times is viewed with a combination of nostalgia and clear-sightedness, not only by Cuthbert but also by his correspondents. Guided by the editor's copious introduction, annotations, and textual apparatus, readers experience the conjunction of people and place that was Flat Rock.


Robert B. Cuthbert, a native of Summerville, attended Clemson University and graduated from the College of Charleston. He served on the staff of the U.S. Vegetable Lab at Charleston for more than forty years. He is the coeditor with Stephen G. Hoffius of Northern Money, Southern Land: The Lowcountry Plantation Essays of Chlotilde R. Martin, published by the University of South Carolina Press.

"Cuthbert has tapped a rich vein of source material that surely will be a treasure trove to any local historians in the Flat Rock area."—The Journal of Southern History

"This collection of letters written from seasonal residents of Flat Rock to their friends and relatives in the Lowcountry presents new insights into the history and growth of the town. Current residents as well as descendants of the South Carolinians who began visiting Flat Rock in the early nineteenth century will find interesting and unusual information about the founding, growth, and history of the town from 1837 to 1939. The letters include comments about travel to Flat Rock by buggy, the arrival of the railroad, hunting and fishing stories, as well as intimate glimpses of the details of the lives of the letter writers. Bob Cuthbert did a masterful job of editing the letters and in addition has provided ample endnotes and explanations, maps, and an extensive index."—Harriott Cheves Leland, coauthor of French Santee: A Huguenot Settlement in Colonial South Carolina

"Flat Rock of the old time may no longer exist, but Robert Cuthbert has summoned it beautifully in this brilliantly edited and compulsively readable collection of letters that celebrates a lost time and place even as it laments their evanescence. A splendid performance."—Harlan M. Greene, head, Special Collections, Addlestone Library, College of Charleston

"When mosquitos ruled the lowcountry, the lucky ones in Flat Rock 'felt like walking for miles' in a 'perpetual laugh' because of the 'charming October [like] weather.' It's clear the cast of characters had talent for living and talent for writing! And, Robert's notes will forever help us untangle the web of Charleston families."—M. Tracey Todd, vice president and chief operating officer, Middleton Place Foundation