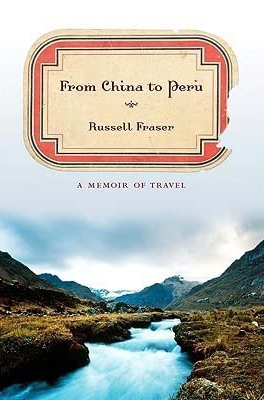 From China to Peru

A Memoir of Travel

"I fly to faraway places in the hopes of finding the distinguishing thing. The frequent flier miles are a bonus."

With a title borrowed from Samuel Johnson, insatiable globe-trotter Russell Fraser fondly recalls his travels in China, Peru, Italy, France, Russia, Scotland, the Persian Gulf, and the Antarctic in this series of meditations on the distinguishing elements of culture and history found in far-flung locales. Fraser establishes himself as a knowledgeable guide who combines an intimate familiarity with local history, a keen eye for culture, a companionable wit, and a penchant for speculation about the grip of the past on the present. Fraser's fascination with people leads him to banter and at times to argue with locals in his quest to discern the peculiarities of a given place, be it a communist training school near Milan or the best bar in St. Petersburg. His grand appreciation for discoveries that can be made only through travel is apparent in every poetically phrased description and artfully reconstructed dialogue.

Fraser begins each essay with an autobiographical passage before turning to the place and moment at hand. This technique establishes camaraderie with our learned, informative, and entertaining guide as we walk deserts and frozen plains, Old World neighborhoods and Far Eastern danger zones, the lobbies of plush new hotels and the aisles of centuries-old cathedrals. In his ruminations, Fraser circles strategically between personal and global pasts—traveling in time as well as space—to put our modernity in perspective and to ponder facets of human experience found amid the regions he describes so vividly. The heart of Fraser's memoir is a two-chapter sequence devoted to meandering through his ancestral homeland of Scotland, a narrative that ably couples family history and travelogue. In the concluding essay, the author's adventure in Antarctica parallels a trip taken decades earlier by his great-grandfather Alexander V. Fraser, the first commander of the U.S. Coast Guard, and again he deftly juxtaposes the personal with the global and the past with the present.

As Fraser advocates for the existence and importance of timeless truths about all corners of the world, he makes even the roughest of environments seem intriguingly beautiful with crystal clear prose evocative of the times and places through which he moves. His tales are peppered with the anecdotes, asides, and well-chosen quotations of a traveler steeped in knowledge of the world's history and its literature. A veteran of these escapades, Fraser uses his experience to hone his observations into a special brand of truth that comes from one who is equally adept at wandering the world and sharing authentic accounts of those sensational travels. From China to Peru is a welcoming invitation to traverse the globe, if only through the insightful memories of one well-versed in such passages.


An accomplished literary critic and historian, Russell Fraser is the Austin Warren Professor of English Language and Literature Emeritus at the University of Michigan. He is author or editor of nearly two dozen books, including Shakespeare: A Life in Art and Moderns Worth Keeping. Fraser lives in Honolulu, Hawaii.

"From China to Peru is a golden book, the shining culmination of years of polished thought, a travel book raised on knowledge and experience and tempered by a rich personality. Personal and historical anecdotes run in rich seams through the pages, making wondrously strong impressions, making me want to shed quiet domesticity and tread the boards of the world seeing and learning, going everywhere and anywhere."—Sam Pickering, author of Waltzing the Magpies: A Year in Australia and Edinburgh Days, or Doing What I Want to Do

"Russell Fraser's From China to Peru is a fascinating series of travel sketches that can be read in any order and that, taken in their totality, add up to a book worth rereading. The author provides an autobiographical prelude for each essay, and so the reader learns of passages in Fraser's earlier life as well as the passages of travel that provide the places and themes of these pieces. Fraser is a keen observer of the human scene wherever the action unfolds before him. His sharp wit and profound learning are revealed through his engaging voice and his distinctive style. Anyone interested in the literature of travel will want to read these essays—excursions into the great world of humanity, geography, and history."—George Core, senior editor, Sewanee Review

"A novelist I knew said, of a certain kind of book, they are all the same: we go there, they come here. He might have meant travel books but that wouldn't describe Russell Fraser's From China to Peru, a book in which the author journeys, intensely open-eyed, to France, England, Scotland, China, Peru, and elsewhere, and then returns after many years, providing a marvelous double window on what place is, what change is, and, most crucial, who Fraser is. Readers won't go far before they see this man has serious knowledge, is steeped in history and literature, is as contrary as he is felicitous, and makes a verbal trip almost the real thing. Any book is, finally, as good as the companionship of the author and I am convinced this fellow offers what we all want of good talk and better times together. He makes going there and coming here a memorably different, special treat."—Dave Smith, author of Little Boats, Unsalvaged and The Wick of Memory: New and Selected Poems, 1970–2000