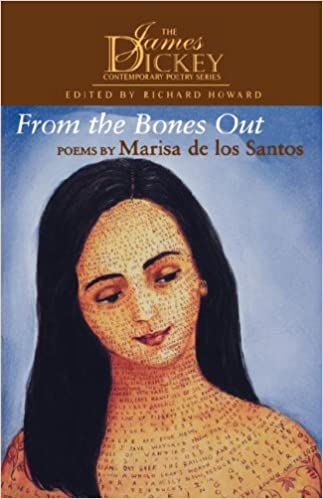 From the Bones Out

Marisa de los Santos often situates her poems in the rich, vividly evoked landscapes of Virginia and Texas as well as her father's homeland, the Philippines, but their true territory is the body itself, particularly the female body. Throughout her work there is a sharp longing for a life of the senses, of "pure corpus." In the words of the poem "Women Watching Basketball," there is the Whitmanian desire "to declare Divine is the flesh! and for once to believe it, believe it."

De los Santos is acutely conscious of all that interferes with the realization of this desire: the brutalities of illness, the transfigurations of age, our readiness to respond to the body as seen object rather than active sentient subject. Even the very passion for language that brings these poems to life is a risk, and in the poem "Io's Gift," the mythical nymph Io laments, "A woman made of words is milkweed, bound to rattle open, scatter, and be lost."

In From the Bones Out, loss, doubt, and conflict engender poems of lucidity and compassion—amounting to empathic verbal gestures—that build connections between women, as well as between women and men, and that seek to illuminate the simple elusive fact that the world is full of lives, each real, each different from the other. The compassion the poems express in sometimes strictly formal, always shapely, lines and stanzas is what gives this collection its grace and moral urgency.

"In its worked simplicity, this is a first book that offers a formula of hope and clarity when confronting life's trials and tribulations."—Publishers Weekly