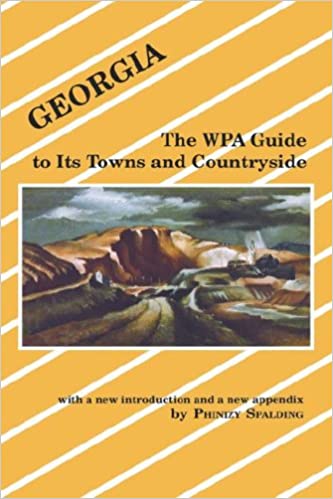 The WPA Guide to Its Towns and Countryside

Originally published almost fifty years ago as part of the Federal Writers' Program, a division of the Works Progress Administration, this book is a reprint of the original WPA guide for Georgia. Divided into four sections, the general background, cities, tours, and appendices, the book features 17 essays on a variety of topics from Georgia's natural setting and resources to its architecture and sporta and recreation. Detailed descriptions of the state's six major cities—Athens, Atlanta, Augusta, Columbus, Macon and Savannah—are also included, and there are 17 remarkably detailed guided tours to all sections of the state as well. In addition to the original chapters, Phinizy Spalding has written a new introduction and a new appendix.

Phinizy Spalding, a native Georgian, is a trained American Colonial Historian whose scholarly work on James Oglethorpe has attracted widespread attention in the field. Spalding has taught history at the University of Georgia since 1966 and has published widely in the general field of Georgia history. He edited the state's historical journal, the Georgia Historical Quarterly, from 1973–80 as the successor of E. Merton Coulter, and has held important positions in the state's premiere historic preservation organization as well. In the final analysis, Spalding is probably as well qualified as any, bearing in mind his long experience and demonstrated affection for the state, to introduce this American Guide Series volume reprint.